JERUSALEM (CNN) -- Clashes between Palestinian protesters and Israeli police in east Jerusalem stretched into Sunday evening after a visit by a Jewish group to one of the city's holiest sites. 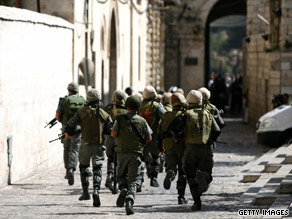 Street battles began in the Old City on Sunday morning, when Palestinians praying at the site -- known to Muslims as Haram al-Sharif, or "Noble Sanctuary," and to Jews as Temple Mount -- began to throw rocks at the visiting Jews, said Israeli police spokesman Micky Rosenfeld.

Chief Palestinian negotiator Saeb Erakat called the visit a deliberate provocation by hardliners opposed to a settlement of the Israeli-Palestinian conflict, and criticized the police response to the protests.

Erakat compared the visit to the 2000 trip by Ariel Sharon -- before he was elected prime minister -- to the al-Aqsa mosque that Palestinians blame for touching off three years of violence.

"We've seen this before, and we know what the consequences are," Erakat said in a statement issued Sunday evening. He said the visit was "deliberately timed" on the eve of the anniversary of Sharon's September 28, 2000 visit.

There was no immediate response from the Israeli government to Erakat's statement.

The demonstration was broken up about 1:30 p.m., but Palestinians continued battling police with rocks and Molotov cocktails for several hours in other parts of east Jerusalem.

Erakat said Israel was "deliberately escalating tensions" in Jerusalem at the same time that U.S. President Barack Obama is trying to coax the two sides into restarting talks aimed a permanent settlement of the decades-old conflict.

"Providing a police escort for settlers who are against peace at all costs, and whose presence is deliberately designed to provoke a reaction, are not the actions of someone who is committed to peace, but of someone who will go to extraordinary lengths to scuttle all hopes of peace," Erakat said.