Bush 'shoe thrower' claims he was tortured in prison

BAGHDAD, Iraq (CNN) -- The Iraqi man who was jailed after throwing his shoes at then-President George W. Bush last year arrived in Syria on Tuesday night, hours after being released from prison, his employer said. 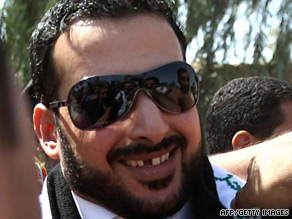 Muntadhar al-Zaidi speaks to reporters shorlty after his release from an Iraqi jail.

Al-Zaidi's brother, Dhirgham al-Zaidi, told CNN that the 30-year-old journalist was to travel in a private plane to Greece for medical treatment.

Shortly after he left prison, the 30-year-old journalist visited the studios of his employer, Al-Baghdadia TV, where he spoke to other reporters about his experience. He wore a sash in the colors of the Iraqi national flag draped around his shoulders.

Muntadhar al-Zaidi said he was beaten with cables and pipes and tortured with electricity immediately after guards removed him from a news conference for hurling both shoes at Bush. He said he was taken into another room and beaten even as the news conference continued.

However, he remained defiant about the incident that landed him in prison.

Al-Zaidi, who was serving a one-year sentence after the jail-throwing incident December 14, was given a "conditional discharge."

Under Iraqi law, a "conditional discharge" allows for the release of a prisoner after he serves three-quarters of his sentence, on good behavior.

Al-Zaidi said he was compelled to act after witnessing what the U.S. invasion had wrought on his country: orphans, widows, refugees.

He said he promised those affected by the war that should he get the opportunity, he would avenge their loss.

That chance came at the news conference, when al-Zaidi threw both his shoes at Bush and called him a "dog," two of the worst insults in the Middle East. Bush ducked the shoes and was not hurt.

During his remarks, al-Zaidi offered one apology: to fellow journalists who perceived his act as unprofessionalism. Sound off: Was a jail sentence too harsh a punishment?

"Professionalism does not preclude nationalism," he said.

Al-Zaidi was sentenced to jail for "assaulting a foreign head of state on an official visit to Iraq."

His original three-year sentence was reduced to a single year by an appellate court in April.

The journalist's family and supporters had waited for two days outside the Baghdad jail where he was held, initially hoping he would be freed Monday, but procedural delays kept that from happening.

Last week, al-Zaidi's family prepared for his release, plastering the walls of their modest Baghdad home with his posters.

"We are happy, like any detainee's family would be happy for the release of its son after the bitter time he spent in jail," brother Dhirgham al-Zaidi said.

He said the family had received many phone calls from supporters across the country who planned to travel to Baghdad and welcome al-Zaidi after his release.

Though many Iraqis hold Bush in low esteem, opinions were mixed in Iraq following the incident. Some viewed al-Zaidi as a hero, with thousands taking to the streets, calling for his release; others said his act went against Arab traditions of honoring guests.

Al-Zaidi's brothers said they had been offered many gifts and financial rewards, though they had rejected them.

All About George W. Bush • Iraq