(CNN) -- An audio message purportedly from al Qaeda leader Osama bin Laden has accused President Barack Obama of being unable to fulfil his election pledge to pull U.S. troops out of Iraq. 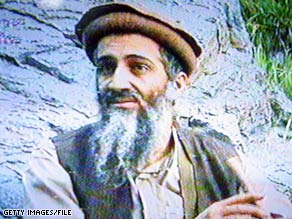 "To the American people, this is my message to you: a reminder of the reasons behind 9/11 and the wars and the repercussions that followed and the way to resolve it," the message said.

"From the beginning, we have stated many times ... that the cause of our disagreement with you is your support of your allies, the Israelis, who are occupying our land in Palestine. Your stance along with some other grievances are what led us to carry out the events of 9/11."

The video plays the audio over a undated photograph of bin Laden. The video also shows a banner with the American flag as the backdrop and an image of the New York City skyline with the twin towers of the World Trade Center -- destroyed in the 9/11 attack -- still standing, said terrorism analyst Laura Mansfield.

CNN could not independently authenticate bin Laden as the speaker in the 11-minute video posted on Sunday by As-Sahab Media -- al Qaeda's production company.

Obama was "a vulnerable man who will not be able to stop the war, as he promised, but instead he will drag it to the maximum possible extent," the message said.

Though U.S. troops no longer patrol Iraq's major cities and a large number have left, tens of thousands remain in the country and are expected to stay for years to come.

The message claims that the Obama administration is under the influence of the Republican White House it replaced, pointing out that the president kept Robert Gates as defense secretary -- a holdover from the Bush administration.

"Prolong the wars as much as you like. By God, we will never compromise on it (Palestine), ever," the message continued.

Mansfield noted that the video brings no new images of the elusive bin Laden, who was last seen in footage two years ago on the sixth anniversary of the terror attacks.

Bin Laden has released audio messages since then, most recently on June 9.