BAGHDAD, Iraq (CNN) -- Syria and Iraq each recalled their ambassadors from the other country Tuesday, after Baghdad demanded that Damascus hand over two suspects in last week's deadly bombings in the Iraqi capital. 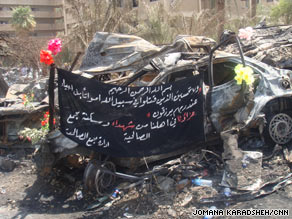 Syrian state-run news agency SANA reported the government was ordering its ambassador home after the Iraqi government summoned its envoy from Syria and demanded that Damascus turn over two Iraqis living in Syria who played "direct roles in the execution of the terror attack," last Wednesday, Iraqi government spokesman Ali al-Dabbagh said in a statement.

A string of bombings struck Iraq's capital August 19, with two truck bombs ripping through the Iraqi Finance Ministry and Foreign Ministry. At least 100 people were killed and hundreds more were wounded in Baghdad's bloodiest day since U.S. troops handed over security control to Iraqi forces and moved outside Iraqi cities nearly two months ago.

Iraqi Prime Minister Nuri al-Maliki visited the Foreign Ministry bombing site Tuesday. "We know it was the Baath Party, known for its heinous crimes throughout history, along with al Qaeda, who did this," he said, according to his office.

The Islamic State of Iraq, the umbrella group for al Qaeda in Iraq, has claimed responsibility for the attack, which Syria condemned.

"Syria felt pain over those bombings and strongly condemned them, describing those explosions as painful terrorist bombings and reiterating the Syrian support to the security, stability, safety and unity of Iraq," SANA reported.

"But what is regretful is the hastiness of the Iraqi government to arbitrarily accuse Syria while analysts say the issue was internal political or, perhaps, foreign disagreements."

The Iraqi government asked Tuesday that Syria "hand over all those wanted [by the Iraqi judiciary] for committing crimes of murder and destruction against the Iraqi people," al-Dabbagh's statement said.

It further demanded that Syria expel "terrorist organizations that use Syria as a headquarters and launchpad to plan terrorist operations against the Iraqi people."

SANA reported that the Syrian government was willing to help the Iraqis investigate the bombings.

"Syria informed the Iraqi side of its readiness to receive an Iraqi delegation to inspect the evidence available to them concerning the bombings' perpetrators," a Syrian official said, according to SANA. "Otherwise Syria considers what has been broadcast through the Iraqi media as mere fabricated evidence intended to serve internal political goals, and the conflicting and contradicting statements by the Iraqi officials are proof of that."

The official added, "Syria, which has frequently repeated its keenness on the unity, independence, security and stability of Iraq, expresses its regret that relations between Syria and Iraq have become subject to internal disagreements and perhaps foreign agendas."

In its claim of responsibility for the attacks, the Islamic State of Iraq said, "The earth shook under their feet and their hearts were torn in fear and horror. ... And the weakness and fragility of their state became apparent to everyone." The statement was posted on Web sites typically used by the group.

The Iraqi government released on Sunday what it said was a confession from a man who said he received orders for the bombing of the Finance Ministry building from a member of former Iraqi President Saddam Hussein's Baath Party who now lives in Syria.

The videotaped statement from Wissam Ali Kadhim Ibrahim, who was identified as a former Baathist police official, aired on Iraqi television.

Ibrahim said he received orders from Sattam Farhan, who he said was a Baath Party leader in Syria. Farhan and Mohammed Younis al-Ahmed, a former senior member of Hussein's regime, are the two men Iraq demands Syria turn over.

The Iraqi government put al-Ahmed as the No. 2 man on a most wanted list it released in 2006, and the U.S. government announced a $1 million reward for him two years earlier.

The spokesman for al-Ahmed's wing of the Baath Party in Syria contended Monday that the videotaped statement was fabricated and alleged that the man could have been paid to make it.

The spokesman said the paths and ideologies of the party could never meet with those of al Qaeda, and blamed the attacks on struggles between Shiite parties in Iraq.

Some midlevel and senior members of the Baath party sought refuge in Syria after the U.S. invasion that ousted Hussein in 2003. Al-Maliki asked for the handover of some of those ex-officials during a visit to Damascus last week, Iraqi officials said.

All About Iraq • The Baath Party • Syria • Al Qaeda in Iraq