Lawyer: Iran has no evidence against Baha'i prisoners

(CNN) -- Iran should release seven Baha'i prisoners accused of espionage because it does not have any evidence against them, their lawyer Shirin Ebadi told CNN on Saturday. 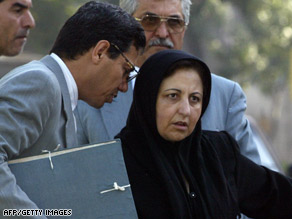 "In the files, in the case basically, there is nothing, no reason that basically convicts them," said Ebadi, a Nobel Peace Prize laureate.

The trial will begin Tuesday despite the fact that one of their lawyers is behind bars and Ebadi is outside the country.

Other attorneys can be appointed, Hassan Haddad of the Prosecutor's Office in Tehran told the state-run Islamic Republic News Agency.

But the court must recognize the replacements, who are colleagues of Ebadi at her Tehran-based Defenders of Human Rights Center, not appoint other lawyers, Ebadi said.

The imprisoned lawyer, Abdolfattah Soltani, is a well-known advocate with the human rights center. He was arrested in the aftermath of Iran's disputed June 12 presidential election and is being held at Evin prison, the same place where his clients are detained, according to the International Campaign for Human Rights.

He is being held on charges of taking "measures against national security," Ebadi said. "Mr. Soltani is completely innocent."

Soltani had an opportunity to leave prison, but under conditions he chose not to accept, Ebadi said.

Along with not giving any interviews after his release, Soltani would also have to end his work with the human rights center and no longer support Ebadi, she said.

In another attack on the law firm, a lawyer was arrested after agents entered the center with guns, searched each room and then declared that they found opium on the premises, Ebadi said.

That lawyer, whose family had been harassed by police, accused the agents of planting the opium, she said.

Ebadi was on a speaking tour when Soltani was arrested and has not returned to Iran.

The firm founded by Ebadi took up the case of the seven Baha'is last year. They are accused of spying for Israel, spreading propaganda against the Islamic republic and committing religious offenses. The Baha'i International Community, which has a delegation to the United Nations, denies the allegations.

The evidence against the defendants includes communication from Israel, but that is because the Baha'i World Center has its headquarters in Israel, said Kit Bigelow, director of external affairs at the American Baha'i Community. Prosecutors are calling that communication espionage, she said.

Human rights groups have demanded the release of the prisoners and accused the government of targeting them because of their religious beliefs.

The Baha'i faith originated in 19th-century Persia, and while modern-day Iran does not recognize it, the government denies any mistreatment of the members of the largest non-Muslim religious minority.

The International Campaign for Human Rights in Iran has reported a rise in persecution of Baha'is in recent years, including cemetery desecration, arbitrary detention, home raids, property confiscation, work expulsion and denial of basic civil rights.

The case of the seven Baha'is has drawn global attention. Roxana Saberi, the Iranian-American journalist freed from Evin prison earlier this year, spoke on their behalf, as have Human Rights Watch and the U.S. Commission on International Religious Freedom, an independent bipartisan federal commission.

The defendants face the death penalty if convicted.

Six of the defendants were arrested in May 2008 at their Tehran homes, and one was arrested in the eastern city of Mashad in March 2008, said Diane Ala'i, the Baha'i International Community's representative to the United Nations. The defendants were held under solitary confinement for the first five months of their incarceration, she said.

The investigation into the charges against the prisoners concluded months ago and the trial was initially scheduled to start in July. Iran has continued to hold them in Evin prison without access to their lawyers and with minimal contact with their families, Ala'i said.

All About Iran • Trials