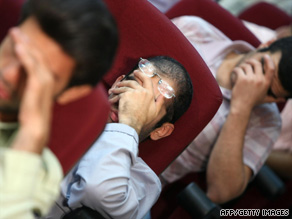 "No judicial system can consider as valid a confession obtained as a result of harsh interrogations or under torture," said Manfred Nowak, who is the U.N. special rapporteur on torture.

The treatment of detainees at Iran's prisons has increasingly become a divisive issue within Iran's Islamic leadership, as reformists continue to accuse the hardline government of allowing abuse and torture in attempts to coerce false confessions.

Iranian officials have denied the allegations.

"These confessions for alleged crimes such as threats against national security and treason must not, under any circumstances, be admitted as evidence by the Revolutionary Court," said El Hadji Malick Sow, vice chairman of the U.N.'s working group on arbitrary detention.

The United Nations, in a news release, said the statements also reflect the position of Margaret Sekaggya, special U.N. rapporteur on the situation of human rights defenders.

Iran is conducting a mass trial of about 100 Iranian defendants in its Revolutionary Court. Reformist politicians, lawyers and journalists are among those accused of protesting in an attempt to overturn government leadership.

Among the defendants are Seyyed Mohammad Abtahi, a former Iranian vice president; Maziar Bahari, an Iranian-Canadian reporter for Newsweek magazine; and Kian Tajbakhsh, an Iranian-American scholar.

Street protests and a brutal government crackdown followed the June 12 presidential election, leading to the arrests of more than 1,000 people. The official death toll from the post-election unrest is 30, although opposition leaders have reportedly said it's more than twice that figure.

On Wednesday, Iran's influential parliament speaker, Ali Larijani, dismissed allegations by Iran's opposition that post-election detainees were raped while in custody, according to state-run media.

Larijani said that a special panel of Iran's parliament, or Majlis, conducted a "precise and comprehensive inquiry" into the treatment at Tehran's Evin and Kahrizak prisons, and found "no cases of rape or sexual abuse," government-funded Press TV reported.

A spokesman for Iran's Foreign Ministry also denied that prisoners had been tortured.

"What kind of talk is this? There was never any pressure used against these people," Hassan Qashqavi said Monday, according to the semi-official Mehr news agency.

They were responding to accusations made by opposition candidate Mehdi Karrubi who, along with opposition leader Mir Hossein Moussavi, ran against hardline President Mahmoud Ahmadinejad in the June 12 election. Iran's election authority declared Ahmadinejad the overwhelming winner of the race, sparking hundreds of thousands of Iranians to take to the streets in protest.

Iranian opposition figures such as Karrubi have compared the treatment of the detainees to political prisoners abused under the "oppressing regime" of the Shah of Iran, who was overthrown by the Islamic Revolution in 1979.

In an open letter to former president Ali Akbar Hashemi Rafsanjani posted Saturday on his party's Web site, Karrubi says an "impartial committee" is needed to "investigate these tragedies with transparency until they are resolved."

He said he is willing to lead the investigation in a "truthful, unbiased fashion."

"Some of the former detainees have told of such brutal and violent, repeated rapes of the young women [in detention] that have caused irreparable damage to their reproductive systems," Karrubi says in the letter. "Others have raped our detained young men with such brutality that they have been afflicted by depression and are no longer speaking with anyone and refuse to leave the dark corners of their houses."

Larijani on Wednesday challenged Karrubi to "present evidence of such outrages" for the Majlis to investigate, according to Press TV.

Iranian media has reported that Ayatollah Ali Khamenei, Iran's supreme leader, has ordered one prison, Kahrizak, shut down amid reports it did not measure up to the required standards. Kahrizak's chief was fired and arrested over allegations of detainee mistreatment, according to local reports Saturday.