Attacks kill at least 42 in Iraq on Shiite religious holiday

BAGHDAD, Iraq (CNN) -- At least 42 people were killed and 154 were wounded in five attacks on a religious holiday Friday, an Interior Ministry official said. 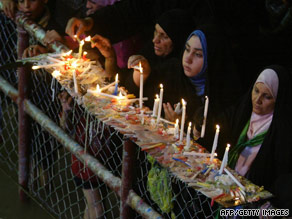 The first four attacks, which together killed 36 and wounded 124, targeted Shiites; the fifth attack was against a Sunni target.

In the latest attack, a parked motorcycle bomb exploded in the marketplace of al-Khadra in a predominantly Sunni neighborhood of eastern Baghdad. Six people died, and 30 were wounded, the official said. The attack appeared to have targeted a police patrol; three of the fatalities were police, the official said.

But most of the carnage was directed at Shiite targets, with the highest single toll exacted in the northern city of Mosul, where a suicide car bomb exploded near a Shiite mosque as a funeral was taking place, killing 30 people and wounding 100, the official said.

In another attack, a roadside bomb exploded near a bus carrying pilgrims in the Sadr City neighborhood, killing three and wounding eight, the official said.

Also in Sadr City, a roadside bomb exploded near a car, killing one person and wounding seven.

And in eastern Baghdad, a car carrying pilgrims was targeted, killing two people and wounding nine.

Friday was the end of a Shiite Muslim celebration in Karbala celebrating the birthday of Imam Mohammed al-Mehdi, the last of 12 historic imams revered by Shiites. Pilgrims participating in such celebrations have been the target of similar attacks by Sunni Muslims.

According to the Oxford Dictionary of Islam, Imam Mohammed al-Mehdi "is expected to return at the end of time as the messianic imam who will restore justice and equity on Earth."

Last Friday, bombs detonated after prayers near five Shiite mosques nearly simultaneously, killing 29 people as they were leaving the mosques.

The attacks fueled fears that sectarian violence could be reigniting in the country and called into question the ability of security forces to safeguard the population as U.S. troops have taken a back seat to their Iraqi counterparts.

Though the number of casualties has dropped over the past year, Friday's attacks show that an insurgency capable of wreaking havoc remains.

CNN's Arwa Damon and Yousif Bassil contributed to this story from Baghdad.

All About Iraq • Shia Islam • Baghdad