JERUSALEM (CNN) -- Palestinian militant groups including the armed wing of Hamas are committing war crimes when they fire rockets into Israel, according to a report by campaign group Human Rights Watch. 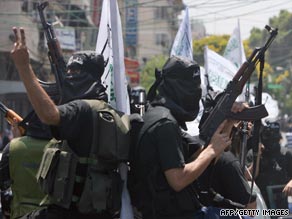 Palestinian militants from the al-Ahrar Brigades march during a rally in Gaza City in July.

Three Israelis have been killed and dozens more seriously injured in Palestinian attacks since November 2008 with rockets striking populated areas up to 40 kilometers (25 miles) inside Israeli territory and putting 800,000 Israelis in danger, the report said.

Two Palestinian girls died in Gaza when a rocket fell short of its intended target while the attacks have also put Palestinian citizens at risk from Israeli counterstrikes, it added.

Human Rights Watch urged Hamas, which controls Gaza, to hold those responsible for the attacks accountable. Hamas is designated a terrorist organization by the U.S. and the European Union.

Hamas militants have cut down on rocket strikes in the past few months, but the group has not denounced those targeting Israeli civilians, nor has it tried those behind the attacks, the New York-based watchdog said.

"As the governing authority in Gaza, Hamas should publicly renounce rocket attacks on Israeli civilian centers and punish those responsible, including members of its own armed wing."

A spokesman for Hamas, Sami Abu Zuhri, criticized the report, claiming Palestinians had the right to defend themselves against Israeli military operations.

"The report is not fair," he said. "It should condemn the (Israeli military) crimes instead of condemning people who defend themselves.

During Israel's offensive into Gaza during December and January, Hamas and Islamic Jihad militants claimed to have fired 820 rockets at Israel, the report said.

Human Rights Watch said the use of homemade Qassam and Soviet-designed Grad rockets to strike at densely populated areas amounted to indiscriminate attacks on civilians because the weapons cannot be aimed with any reliability.

The watchdog found no evidence that Palestinian armed groups had deliberately used civilians as shields in rocket attacks. But it said militants took insufficient precautions to avoid putting civilian lives in danger.

"Hamas forces violated the laws of war both by firing rockets deliberately or indiscriminately at Israeli cities and by launching them from populated areas and endangering Gazan civilians," Levine said.

While Israeli military operations had been more harmful, killing hundreds of civilians with airstrikes, tank shelling and other assaults, "violations by one party to a conflict never justify violations by the other," it said.

"Attacks targeting civilians are never permitted under the laws of war, which require armed forces to target only military objectives, and to take all feasible precautions to spare civilians from harm, regardless of the reasons for resorting to armed conflict."

The United Nations is investigating violations by both sides and is due to report to the U.N. Human Rights Council in September.