JERUSALEM (CNN) -- President Obama's offer to engage with Iran is not "open-ended," and he is "anticipating or hoping for" a response within the next two months, U.S. Defense Secretary Robert Gates said Monday. 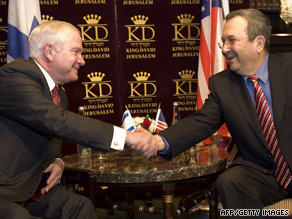 Standing alongside his Israeli counterpart, Ehud Barak, Gates emphasized U.S. concern about "what appears to be [Iran's] intent to develop nuclear weapons."

"I think we're in full agreement of the negative consequences of Iran obtaining this kind of a capability," Gates said. "I think we are also agreed that it is important to take every opportunity to try and persuade the Iranians to reconsider what is actually in their own security interest."

The defense secretary's visit to Israel is part of a busy week of U.S. diplomacy in the region. George Mitchell, Obama's special envoy to the Middle East, is also meeting with top officials, including Palestinian President Mahmoud Abbas in the West Bank.

At a joint news conference, Gates and Barak discussed their common ground with respect to Iran, though Barak noted that Israel seeks tough actions. "If there is an engagement, we believe it should be short in time, well-defined in objectives, followed by sanctions," Barak said.

He added, "We sincerely believe that no option should be removed from the table. This is our policy, we mean it, we recommend to others to take the same policy, but we cannot dictate it to anyone."

Gates said Obama "has been quite clear that this is not an open-ended offer to engage. We're very mindful of the possibility that the Iranians would simply try to run out the clock. The president is certainly anticipating or hoping for some kind of a response this fall, perhaps by the time of the U.N. General Assembly." The assembly session is scheduled to begin September 23.

"There's no question that a nuclear-armed Iran would be profoundly destabilizing to the entire region and a threat to, certainly, to Israel, and a threat to the United States and other states as well," Gates said.

Tehran denies any effort to build nuclear weapons, insisting its nuclear technology is for energy purposes only.

But Israel, the United States and some other Western nations have expressed concerns that the energy program is a guise for building nuclear arms.

The Iranian leadership antagonizes Israel. At public events, Iranian leaders call on the crowd to chant, "Death to Israel." Iranian President Mahmoud Ahmadinejad has called for the end of Israel as a Jewish state.

Israel has said that the idea of a strike against Iran's nuclear facilities is on the table.

Obama recently told CNN he had not given Israel his approval for a potential strike.

"We have said directly to the Israelis that it is important to try and resolve this in an international setting in a way that does not create major conflict in the Middle East," he told CNN earlier this month.

The U.S. effort in the Middle East this week is also aimed at smoothing tensions that have erupted over Obama's demand that Israel freeze settlement activity in the West Bank.

"Our governments are friends and allies," Mitchell said Sunday after his meeting with Barak.

"These are discussions among friends, both personal and public; these are not disputes among adversaries."

Mitchell came to Israel after meeting with Syrian President Bashar al-Assad -- a sign of U.S. recognition that Syria is a key to reaching peace in the region.

Mitchell also had meetings scheduled in Egypt and Jordan.

The flurry of activity is intended to jump-start the stalled Israel-Palestinian peace process.

All About Israel • Iran • Middle East