TEHRAN, Iran (CNN) -- Iranian President Mahmoud Ahmadinejad fired two members of his cabinet, and may have to face a vote of confidence in parliament for the final few days of his current term, two semi-official Iranian news agencies reported Sunday. 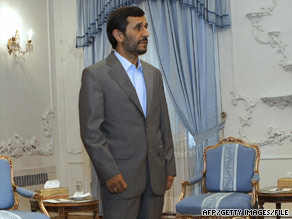 But the state-run Islamic Republic News Agency (IRNA) quoted a government official as saying that only one cabinet member was fired, so no such vote would be needed.

Ahmadinejad, whose controversial victory in presidential elections in June stoked widespread unrest in Iran, is scheduled to be sworn in for his second term during the first week of August.

Fars said that after firing Harandi, the president was trying to get him to come back in order to avoid a confidence vote.

Fars quoted Ahmad Tavakoli, a powerful rightist member of parliament who does not support Ahmadinejad, as saying, "I advise the president to change his mind."

"Firing the ministers has no logical reason and creates difficult conditions for the country. This is not a suitable response to the trust of 24 million people who voted for the president," Tavakoli was quoted as saying.

The deputy head of Ahmadinejad's information office, Mohammad Ja'afar Mohammadzadeh, was quoted by IRNA as saying that only Ejeie was fired.

All About Iran • Mahmoud Ahmadinejad