TEHRAN, Iran (CNN) -- The bodies of 152 people killed in a fiery plane crash in Iran Wednesday have been returned to their families, an Iranian state broadcaster reported Sunday. 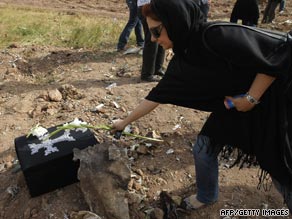 Ahmad Majidi, the head of the special working group investigating the Caspian Airlines crash, also said a Russian team had arrived in Iran to help study the crash of the Russian-made plane, Islamic Republic of Iran Broadcasting said.

The plane went down in a field near the city of Qavzin Wednesday, killing all 168 people on board and leaving a huge smoldering crater.

Majidi did not say what had happened to the 16 bodies that have not been handed over.

The plane's flight data recorders have been recovered and are being studied by Iranian and Russian experts, IRIB said. Fragments of the plane are also being examined to help determine the cause of the crash, Majidi said.

Video of the crash site showed a huge crater in the earth scattered with charred pieces of the plane and tattered passports.

Watch as the flight data recorders are recovered »

"The aircraft all of a sudden fell out of the sky and exploded on impact, where you see the crater," a witness told Iran's government-backed Press TV from the crash site.

Ten members of the country's youth judo team were aboard the plane, several sources including Press TV reported. The government-backed network said the dead included eight athletes and two coaches.

It was at least the fifth major airline accident in the world this year, following crashes of planes flown by Colgan Air, Turkish Airlines, Air France and Yemenia Airways. A US Airways pilot managed to land his plane safely on the Hudson river in New York City in January, with no major injuries, after the plane lost power.

But aviation safety expert John Wiley said there was no reason to fear air travel in general, and no one airline or aircraft is particularly dangerous.

Conversations between the pilot and the ground were normal and did not indicate any technical problems, the network's Web site reported, citing the managing director of Iran's airport authority without naming him.

The Tupolev 154 is essentially banned in the West because it does not comply with European noise and pollution regulations, but it has a safer-than-average accident record, Wiley said. Wednesday's crash is the first on record for Caspian Airlines, which was founded in 1993, he added.

That would have put the flight in one of the safest stages of travel, according to International Air Transport Association data. Only about 5 percent of accidents take place during the phase called en-route climb, 16 to 20 minutes into a flight, when a plane climbs to cruising altitude of 35,000 feet.

About half of accidents take place during landing.