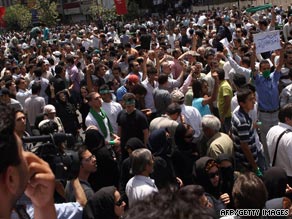 The advocacy group said human rights lawyer Shadi Sadr, who was walking with friends to Friday prayers, was confronted by people dressed in civilian clothes. They pushed her into a car and drove off, the group said, citing witnesses.

In a subsequent telephone call to her husband, Sadr said she had been arrested and detained in ward 209 of Tehran's Evin prison, the group said.

"Her husband reported that intelligence officers had searched his house and requested the keys to her legal office," the group said.

Sadr suffers from gland and bone problems, needs medication, and was scheduled to undergo an operation next week, the group said.

It said several other human rights lawyers, including Abdolfattah Soltani, Kambiz Nourouzi and Mohammed Ali Dadkhah, have been detained in recent days.

Police used tear gas on demonstrators and beat and arrested at least 40 of them, taking them away in the trunks of unmarked cars, a witness told the campaign.

The campaign called for the release of more than 2,000 people it said have been arrested since the contested June 12 elections that officially gave incumbent Mahmoud Ahmadinejad a landslide victory.

It also called on the United Nations and the Human Rights Council to travel to Iran to investigate.

Because of government restrictions on international journalists, CNN is not able to confirm the report.

In a separate statement, Amnesty International said arrests in Iran of civil society activists like Shadi Sadr appear to be intensifying.

"This was an illegal, arbitrary and violent arrest in which no attempt was made by the authorities to show identification or provide any explanation for their action," said Malcolm Smart, director of Amnesty International's Middle East and North Africa Programme.