TEHRAN, Iran (CNN) -- A day after an Iranian passenger plane crashed in flames killing all 168 people on board, aviation officials were Thursday examining the aircraft's damaged flight data recorders to try to determine the cause of the disaster. 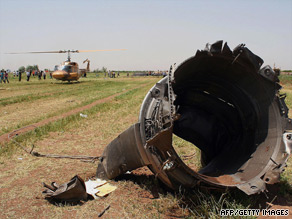 Debris from the plane was littered around the crash site.

Caspian Airlines flight 7908 -- a Russian-made Tupolev Tu-154M -- plunged to the ground and disintegrated minutes into its flight from Tehran to the Armenian capital, Yerevan, officials said.

Flight data recorders were recovered Wednesday from the crash site -- a smoldering crater strewn with charred plane pieces and tattered passports --but Iranian media reported the so-called "black boxes" had been badly damaged.

"If efforts to retrieve data from the boxes fail, they will be sent back to the country that has produced them so that they could be repaired in order to find the reason behind the crash," Transport Ministry official Ahmad Majidi said, according to Press TV.

A team of investigators from the Russian Interstate Aviation Committee is expected to join the crash scene investigation to work alongside Iranian aviation authorities, the agency said on its Web site.

An agency official declined to comment further, saying the plane was operated by an Iranian company and nothing is known about it.

A Tupolev representative told CNN the manufacturer will not comment until the aviation committee releases its report on the crash.

Watch as the flight data recorders are recovered »

Conversations between the pilot and the ground were normal and did not indicate any technical problems, the Press TV reported, citing the managing director of Iran's airport authority.

Wednesday's disaster was the fifth major airline accident this year, following crashes of planes flown by Colgan Air, Turkish Airlines, Air France and Yemenia Airways. A US Airways pilot managed to land his plane safely on the Hudson river in New York in January, with no major injuries, after the plane lost power.

Aviation analyst Kieran Daly told CNN that many aircraft operating in Iran are aging Tupolevs, some dating back to the 1970s.

He described Tupolevs as "workhorses of the old Soviet aviation system."

But he said the Caspian Airlines fleet is based on a slightly newer design, dating to the late 1980s and early 1990s.

Pictures from the scene were "consistent with a high-speed impact," he said. But he added that there could be large debris not seen on television, and that could change his analysis.

Watch Daly talk about the crash »

The Tupolev 154 is essentially banned in the West because it does not comply with European noise and pollution regulations, but it has a safer-than-average accident record, aviation safety expert John Wiley told CNN.