(CNN) -- The death of a Canadian soldier in battle-scarred Afghanistan on Thursday brings this month's toll of international military fatalities in the war to 47, the highest monthly tally so far, a CNN count of official statistics shows. 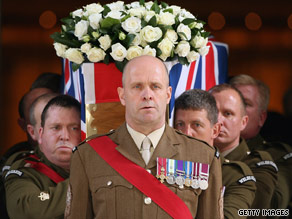 Lt. Col Thorneloe was one of 15 British troops killed in action in Afghanistan this month.

The Canadian soldier was killed while he was conducting operations in the Panjwayi District in Kandahar province, the Canadian military said.

The previous monthly record was 46, a mark reached twice last year, in June and August.

The growing death toll, which only accounts for the first half of July, comes amid an uptick in fighting across Afghanistan, where international forces and Afghan troops have been battling the Taliban.

The push, called Operation Khanjar, targets militants in Helmand province, a Taliban stronghold and poppy-growing region. The forces are trying to gain and hold ground in the perilous region ahead of national elections this August.

Some of the deaths resulted from nonhostile incidents such as accidents, but most have occurred during hostilities.

According to a CNN count of figures from various governments, the U.S.-led coalition and NATO's International Security Assistance Force, the deaths in July have included 23 Americans, 15 Britons, five Canadians, two Turks, an Italian and a NATO-led soldier whose nationality has not yet been disclosed.

The news coincides with another grim milestone for the British military, which has seen the number of troops killed in Afghanistan surpass the death toll in the Iraq War.

An especially bloody 10 days in Afghanistan's Helmand province, the staging ground for several major recent offensives, claimed the lives of 15 British soldiers in July, putting the number of the country's dead in Afghanistan at 184, the Defense Ministry said.

The British military has lost 179 soldiers in Iraq.

The 15 deaths in July also put the British military on track to be the deadliest month yet for British troops supporting Operation Enduring Freedom.

Since the United States launched Operation Enduring Freedom in Afghanistan in 2001, 652 U.S. troops have died in hostile and nonhostile activities throughout the country.