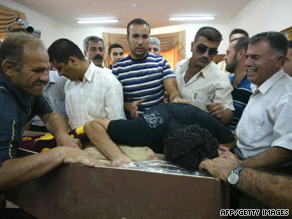 Family members of Rizko Aziz Nissan grieve before his funeral in Kirkuk, Iraq, on Sunday.

The first bombing took place Saturday night at St. Joseph's church in western Baghdad, according to an Interior Ministry official. Two bombs placed inside the church exploded at about 10 p.m. No one was in the church at the time of the attack.

Sunday afternoon, three bombs exploded outside churches, wounding eight civilians, the official said. The bombs detonated within a 15-minute span, between 4:30 and 4:45 p.m. Two of the churches are in central Baghdad's al-Karrada district, and the third is in al-Ghadeer in eastern Baghdad.

Sunday evening, a car bomb exploded outside a church on Palestine Street in eastern Baghdad just after 7 p.m., the official said. Four people died, and 21 were wounded.

Watch how the bombings unfolded »

And in southern Baghdad's Dora district, a bomb outside a church wounded three other civilians.

Most of the churches were damaged in the bombings, according to video footage.

One Christian Iraqi, interviewed outside Sacred Heart Church -- one of the two in al-Karrada -- said the bomb went off shortly before 5 p.m., as members were arriving for Sunday evening mass. No one was hurt, Sabhan George told CNN, but the bomb damaged the church building and some cars outside.

George said he is concerned about the church bombings. If this continues, he said, "there will be no Christians left in Iraq."

St. Joseph's was one of six churches hit by coordinated bombings of Christian houses of worship in Baghdad and Mosul in 2004. The church is in the al-Jamiaa neighborhood of Baghdad, a former stronghold of al Qaeda in Iraq. There have been recent reports of an increase in targeted attacks in the area.

Many of Iraq's estimated 1 million Christians have fled the country after targeted attacks by extremists. In October, more than a thousand Iraqi families fled the northern city of Mosul after they were reportedly frightened by a series of killings and threats by Muslim extremists, who apparently ordered them to convert to Islam or face possible death. At least 14 Christians were killed in Mosul in the first two weeks of October.

Separately, gunmen shot and killed an official in the Iraqi city of Kirkuk on Sunday morning, a local police official told CNN.

Using guns with silencers, the assailants opened fire on Rizko Aziz Nissan outside his home in central Kirkuk at 8:15 a.m.

Nissan was an Iraqi Christian, but the motives behind his killing were not immediately clear. Kirkuk is 150 miles (240 kilometers) north of Baghdad.