Man's family learns of his death one month after Iran protests

(CNN) -- An Iranian family learned of their 19-year-old son's death nearly a month after he was shot during a demonstration over the Islamic republic's disputed election results, an international human rights group said Sunday. 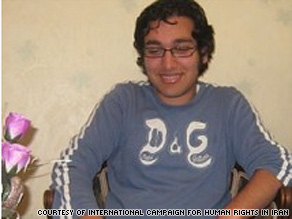 Sohrab Aarabi's family gave this photo of him to the International Campaign for Human Rights in Iran.

Sohrab Aarabi was apparently shot dead June 15 during one of the bloody protests that followed the June 12 presidential elections, according to the International Campaign for Human Rights in Iran.

At least 20 protesters were killed in the chaos and more than 1,000 were arrested in Tehran in the first few days after the election, but it was not clear whether Aarabi's death was counted among those.

The teenager was buried about 9:30 a.m. Monday at Beheshteh Zahra, Tehran's largest cemetery.

The group says Aarabi's mother, Parvin Fahimi, made repeated attempts to get details about her son after he disappeared. The Revolutionary Court summoned the family on Saturday -- 26 days after he was killed -- to notify them of his death, which the coroner had recorded on June 19.

Iranian government officials could not immediately be reached for comment.

The human rights group is calling for an independent investigation into Aarabi's death and also into why it took so long for the family to be notified.

"Many families fear they will also be told their loved ones were killed in the demonstrations, and will be left to wonder if it is the truth, " said Hadi Ghaemi, a spokesman for the human rights group. "Indeed, the families of the disappeared are suffering from a form of torture because of the absence of credible information."

Iran's clerical leadership has declared hardline incumbent Mahmoud Ahmadinejad the winner of the election. His chief rival in the race, reformist Mir Hossein Moussavi, has pledged to establish a new political party aimed at reining in the power of the Islamic Republic's leadership.

Aarabi's funeral -- which was announced on the social networking Web site Facebook on Sunday -- drew 300 to 350 mourners.

There was no police presence, and cemetery officials freely offered information about his funeral, as opposed to instances when services are held quietly to avoid publicity.

Some mourners, strangers to the family, attended out of political sympathy. They defiantly chanted "Allahu Akbar," or "God is Great," throughout the service.

Some of the mourners held placards during the service, bearing messages such as "My martyred brother, we will continue your way," and "My martyred brother, I will take back your vote." They also held up their right hands in victory signs, which has become a symbol of the political opposition.

One of the mourners spoke, reciting a poem, and said of Aarabi: "What was done to you, no animal would do to another animal."