(CNN) -- Iran has released a British embassy staffer, leaving one of the embassy's local staff in jail, the Foreign Office in London said Monday. 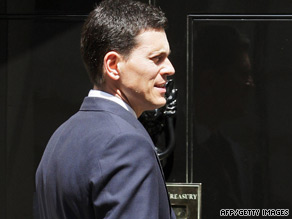 "We are confirming that one of our staff remains in detention," a Foreign Office representative told CNN, declining to be named, in line with British government policy. "It remains our top priority to get all our staff freed."

A leading Iranian cleric said Friday that the remaining British embassy staffer could be tried for inciting unrest in the wake of Iran's disputed June 12 presidential election.

However, Britain's foreign secretary warned Sunday that there would be "consequences" if Iran did not release the remaining embassy staffer.

"The whole of the European Union and actually the international community more broadly has been absolutely united in saying that there's no place for this sort of intimidation or harassment and that there will be consequences if it continues," David Miliband told a BBC Sunday morning talk show.

Miliband said he was angry about the treatment of the embassy staff but wanted to keep diplomatic channels open.

"It's very important that my anger, my cold anger about the way our staff have been treated -- Iranians, in this case -- doesn't turn into a rhetorical volley to the Iranian regime, because that doesn't do anything for our people or for reform in Iran," he said.

The embassy employee who has been threatened with trial in Iran has done nothing wrong, the minister said.

"He is an honorable, patriotic Iranian who has been working in an open, transparent way for the United Kingdom," Miliband said.

He and the embassy staffers were among many detained in the wake of the presidential election. Officials said President Mahmoud Ahmadinejad won the four-way race in a landslide.

His opponents said the race was rigged, and Iranians took to the streets for two weeks of protests.

Iranian opposition leader Mir Hossein Moussavi, one of the defeated candidates, plans to form a new political party aimed at reining in the power of the Islamic republic's leadership, a leading reformist newspaper reported Sunday.

Moussavi told supporters the party will be focused on upholding "the remaining principles of the constitution," according to Etemad-e Melli, a newspaper aligned with fellow opposition candidate Mehdi Karrubi. He is expected to file papers with Iran's Interior Ministry to establish the party before Ahmadinejad is sworn in for a new term, the newspaper reported.

Moussavi's and Karrubi's supporters turned out in crowds estimated in the hundreds of thousands to demand the results be overturned, but Iran's Guardian Council -- which oversees the elections -- has declared the official count will stand.

In another move to crack down on information flowing out of Iran, the Islamic republic's judicial chief has ordered the prosecution of individuals "who cooperate with satellite television programming providers," a reformist newspaper reported Sunday.

"The individuals, who in any way collaborate with these networks or are entrenched in the nucleus of organizations which are active through Internet sites, must be adequately and properly subject to legal actions. It is imperative that this phenomenon be seriously dealt with, by all judicial authorities of the country as well as by provincial judicial authorities," Ayatollah Seyyed Mahmoud Hashemi-Shahroudi said in his order, which was quoted by the newspaper Hamshahri.

The scope of the reported threat -- and whether it was referring to international networks, reporters and freelancers -- was not immediately clear. Because international journalists have been limited in their ability to gather news in Iran, CNN has not been able to confirm the news report.

However, the government has been trying to limit the flow of online information and other forms of communications in Iran, according to activists and human rights officials. Since the election, the world has had a front-row view of the unrest, thanks largely to dissidents using online tools to spread the news.

News from Internet users has been vital as Iran's government began kicking out some reporters from traditional media outlets, arresting others and restricting the movements of those who remained. More than 1,000 people have been arrested over the election fallout, including several journalists, according to the human-rights watchdog Amnesty International.

Most recently, the semi-official Fars news agency reported that a journalist for Newsweek magazine who was arrested in Tehran confessed to doing the bidding of Western governments, though CNN could not verify the report. Maziar Bahari, 42, made his alleged confession at a news conference Tuesday.

Fars reported that the Canadian-Iranian reporter, who had worked for the BBC and England's Channel 4 network, admitted having filed false reports for Newsweek during the elections. The magazine has rejected the allegation.