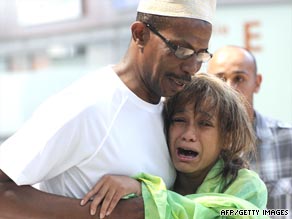 Relatives of passengers on the doomed jet arrive at Marseille airport in southern France.

The ministry clarified comments made earlier in the day by the ministry's junior minister for cooperation Alain Joyandet.

He told CNN affiliate BFM TV that the "black boxes" -- the flight data recorder and the cockpit voice recorder -- had been localized.

"The jet distress beacons were found, instead of the black boxes," the ministry later clarified. "There could have been some confusion."

The Airbus 310 went down early Tuesday, carrying 142 passengers and 11 crew members on a flight that originated in Yemen's capital, Sanaa.

The jet took off from Sanaa at 9:45 p.m. Monday and vanished from radar when it was about 16 miles from Comoros' capital, Moroni.

The French navy and Yemeni authorities expanded search efforts for wreckage and bodies Wednesday, with a French frigate among the ships joining the search.

Watch what is known about the flight »

Searchers had recovered three bodies, Qadir said. Bahia Bakari, a 13-year-old French girl, was the only known survivor. Her mother was also on the flight, but she has not been found.

The girl's father Kassim Bakari told France Info, a French radio network, that his wife and daughter were flying to Comoros to visit relatives.

"When I had her on the phone, I asked her what happened and she said, 'Daddy, I don't know what happened, but the plane fell into the water and I found myself in the water ... surrounded by darkness. I could not see anyone,'" Bakari said.

Passengers on the flight included 66 French citizens, 54 Comorians, one Palestinian and one Canadian, according to Yemeni and French officials. The crew was made up of six Yemenis, two Moroccans, one Ethiopian, one Filipino and one Indonesian.

A number of potential contributing factors were being considered in the crash.

"The weather conditions were indeed very troubling and the winds were very strong, reaching 61 kilometers per hour (38 mph)," Qadir said. "That's one thing. The other thing was that the sea was very rough when the plane approached landing at Moroni airport."

But French Transport Minister Dominique Bussereau noted that France banned the Yemenia Airbus A310-300 several years ago because of safety concerns.

It is the second crash involving an Airbus jet in a month. On June 1, an Air France Airbus A330 crashed off Brazil while en route from Rio de Janeiro to Paris, France. All 228 aboard are presumed dead. The cause remains under investigation.

CNN's Saad Abedine and Ayesha Durgahee contributed to this report