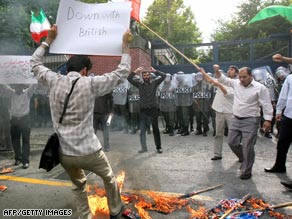 Students are shown burning British and U.S. flags outside the British embass in Tehran last week.

"The fact that Iran is stable, calm and secure, they're upset with this," Intelligence Minister Gholam-Hosein Mohseni Ejei told Iran's Press TV.

Iran intensified its crackdown on the protests that have followed the June 12 election over the weekend, reportedly seizing wounded protesters from their hospital beds and arresting local British Embassy staff in Tehran. British Foreign Secretary David Miliband protested the arrests as "harassment and intimidation of a kind which is quite unacceptable."

"About nine" staffers have been affected, he said, adding that some had already been released.

"We have protested in strong terms directly to the Iranian authorities about the arrests that took place yesterday," but there has been no response, Miliband said.

Ejei told Press TV that Iran had "hard evidence" of outside powers, led by the United States, stirring up demonstrators.

"Behind this there are at least two Western countries, with the United States spearheading them," he said. Dissidents "had orders from different places, but they all followed the same goal," he said.

And Ejei told the semi-official Fars news agency the British Embassy played "a heavy role in the recent disturbances, both through the media and by using its local people."

"One of the things the embassy did was to use the cover of their local employees to send certain people out on the streets among those who caused the disturbances to spread what they wanted among them and to the society at large," he said.

"A number of these people have been clearly involved in the disturbances and have been identified and filmed and photographed," he added. But he said Iranians "have separated themselves from those who create disturbances, and surely the people will confront them and the security forces will naturally confront them as well."

Supporters of the leading opposition candidate, former Prime Minister Mir Hossein Moussavi, have accused the government of rigging the official results that showed hardline incumbent President Mahmoud Ahmadinejad winning re-election without a runoff in a field of four candidates. Moussavi and another opposition candidate, former parliament speaker Mehdi Karroubi, have called for the results to be thrown out.

The Iranian government has long accused other countries, especially Britain, of "meddling" in its affairs, but has offered no proof any outside forces have been involved in the unrest since the election. On Wednesday, Iranian authorities said they had arrested several foreign nationals, some with British passports, for allegedly helping foment the disturbances.

Miliband rejected the allegation on Sunday.

"The idea that the British embassy is somehow behind the demonstrations and protests that have been taking place in Tehran in recent weeks is wholly without foundation," he said.