TEHRAN, Iran (CNN) -- The body overseeing elections in Iran reminded opposition candidates in the disputed presidential election that they have until Sunday to lodge any further complaints about the vote, state-run media reported. 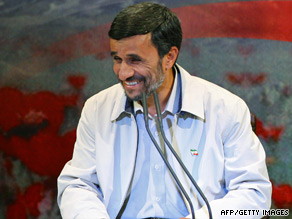 Opposition candidates have until Sunday to file complaints about Mahmoud Ahmadinejad's victory.

The Guardian Council "has called on all political and religious figures to voice their queries and present any documents on alleged irregularities," according to comments Saturday from council spokesman Abbas-Ali Kadkhodaie, who was quoted by state-run Press TV.

"Mehdi Karrubi and Mir Hossein Moussavi have 24 hours to come into council in person and introduce their representatives," a Press TV anchor reported on air Saturday, referring to the two candidates who contend the vote results are fraudulent.

Earlier this week, Iran agreed to extend the deadline for election complaints from Tuesday to Sunday amid persistent post-election protests that were met by a fierce show of force by police and Basij militia.

Demonstrators took to the streets after the June 12 presidential elections in which President Mahmoud Ahmadinejad was declared the winner in a landslide, a contest many Iranians believe was rigged.

Moussavi, Ahmadinejad's chief rival, called the results fraudulent and asked for a cancellation of the vote. Karrubi and another candidate, Mohsen Rezaie, have raised questions about the fairness of the election. Rezaie has since withdrawn his complaint.

While the Guardian Council said it would not annul the vote, it did acknowledge minor problems.

It said it would randomly recount up to 10 percent of "ballot boxes" -- a process to be televised in the presence of opposition candidates and a special commission, acting as observers.

Moussavi had many complaints, including his assertion that election observers were absent and had been kicked out of polling places. But the council said it found only "slight irregularities" after investigating.

An open letter to the Guardian Council, attributed to Moussavi, appeared Saturday on the candidate's Web site, Ghalam news. "I suggest that the issue be referred to a legitimate legal and independent mediation body that is acceptable by all the candidates and supported by those grand sources of emulation who have been advocating the resolution of this issue," the letter said. CNN has not been able to verify the authenticity of the site.

The letter also renewed Moussavi's call for annulling the election.

Rezaie, meanwhile, is quoted as saying he will have his representative appear before the Guardian Council if the other candidates do the same. And, he welcomed the establishment of a special commission.

He made his remarks in a letter published by the government-run Iranian Labor News Agency.

He said he hoped Karrubi and Moussavi "will take advantage of this opportunity in order to clear any possible questions and doubts regarding the elections and to gain the people's rights."

Rezaie explained why he isn't following up on complaints he has raised.

"I believe that individually following up on the complaints would be beneficial for the safeguarding of the individual's rights but cannot be helpful for protecting the rights of the society as a whole because it would not be comprehensive enough."