TEHRAN, Iran (CNN) -- As Iran extended the deadline Tuesday to file complaints about the disputed presidential election, one candidate lashed out at the hardline government while another went the opposite direction and withdrew his accusations. 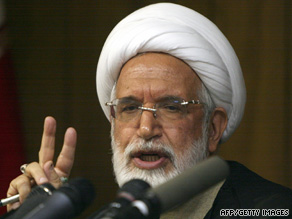 Karroubi, in a letter addressed to the head of state-run radio and television, scolded Iranian media for blaming recent violence and chaos on the demonstrators who took to the streets after the results of what they believed were fraudulent elections on June 12.

The "assaults, beatings and murder of innocent people" were committed by plain-clothed security forces, not by demonstrators as the Iranian media would like its audiences to believe, Karroubi said in an open letter addressed to Ezattollah Zarghami, which was posted on Karroubi's Web site.

"You know well that those who support Mr. Ahmadinejad's government today are promoters of fanatic and Taliban-like Islam," Karroubi said.

All of Iran's media outlets are controlled by the government.

Watch how Iranian TV is covering the crisis »

CNN could not confirm the authenticity of Karroubi's statement because international journalists have been restricted in covering events in Iran.

Karroubi, a former Parliament speaker and a leading reformist candidate in 2005, saw his support plunge from 15 percent he won that year to less than 1 percent in the June 12 election. Both he and Ahmadinejad's chief rival, Mir Hossein Moussavi, have questioned the legitimacy of the vote count and called for the cancellation of the election.

Iran extended the deadline for registering such complaints on Tuesday at the request of the powerful conservative Guardian Council, Iran's government-funded Press TV reported Tuesday.

The supreme leader acceded to the request Tuesday night; the new deadline is Sunday.

But even as the deadline was extended, another candidate, Mohsen Rezaie, withdrew his earlier complaint about voting irregularities and demand for a recount of the ballots.

In a letter addressed to the Guardian Council that was posted on Rezaie's Web site Tuesday, the presidential candidate said he had intended to follow up his accusations.

But, he said, as a "selfless soldier for the Islamic republic," he could not pursue his allegations given the "critical" and "pivotal" political and social conditions of the country. He said controlling the situation was more important than election results.

CNN could not determine the authenticity of the posting.

Officials declared incumbent Ahmadinejad the winner of the presidential election by a margin of 2 to 1 over his nearest rival, Moussavi, to the surprise of many who had expected the challenger to win.

Moussavi accused the government of vote-rigging and demonstrators have been protesting the results for more than a week.

A Facebook account in the name of former Iranian President Mohammad Khatami, a reformist, called for daily protests at markets across the nation, starting Tuesday.

"We shall bring our children along, and peacefully continue our protests. No sign boards, without wearing green (the color protesters have adopted), we go towards the bazaar with the intention of shopping. However we will buy nothing and we go with the aim of closing down the bazaar. We shall leave no marks or traces behind ourselves, not even showing the victory sign with our hands," says the post on the Facebook page, which CNN cannot confirm is run by the former president.

Watch how the election has become a civil rights movement »

A message posted on Twitter said more than 10,000 people demonstrated in the eastern city of Tabriz, where Moussavi comes from. The Iranian government has put tight restrictions on CNN and other journalists, making it difficult to confirm reports such as the one from Tabriz.

Pro-government militias were out on Tehran streets Tuesday, but many drivers put their hazard lights on as a sign of support for the protests, eyewitnesses told CNN. CNN is not naming them for security reasons.

U.S. President Obama said Tuesday that Iran's government must justify itself not in the eyes of the United States, but in the opinion of its own people.

Shortly before he spoke, Iranian state-run media reported Ahmadinejad will be sworn in to a second term between July 26 and August 19.

The Iranian parliament's board of directors said he will be sworn in and will present his new Cabinet to parliament during the three-and-a-half week period, government-funded Press TV reported, citing the official Islamic Republic News Agency (IRNA).

The ministry summoned Iran's ambassador to Paris "and called for the immediate release of those arrested, as well as respect for the freedom of the press and communication and the right to demonstrate," it said in a statement. It was the second time France has called the ambassador on the carpet since the election.

Iran and the United Kingdom engaged in a round of tit-for-tat diplomatic expulsions as France was stating its position. Iran expelled two British diplomats Monday, and London responded by expelling two Iranian diplomats Tuesday, the Foreign Office in London told CNN.

Athens is in touch with the Iranian authorities, working to get him released, the spokesman said. Athanasiadis was traveling on a Greek passport, he added.

"We hope the situation will be resolved very soon," Washington Times Executive Editor John Solomon said in a statement.

It was unclear why the reporter was arrested, according to Fars, which cited Iran's director of foreign news media, Mohsen Moghadaszadeh.

Iran's government has restricted international journalists from covering street rallies protesting the results of the election.

On Sunday, the BBC said Iran had expelled Jon Leyne, its permanent correspondent in Tehran. Also on Sunday, a Canadian-Iranian working for Newsweek magazine in Tehran was "detained without charge" by Iranian authorities, according to the magazine.

And the Tehran bureau of the Dubai-based Arab satellite station Al-Arabiya was ordered closed, the station said.

According to Reporters Without Borders, 36 journalists have been arrested -- 26 of them Iranian -- since the presidential election while "many others" are missing.

Ahmadinejad was declared the winner of the race two hours after the deadline for voting, while some precincts were still open.

Iran's interior ministry has said that 85 percent of the country's 46 million eligible voters cast ballots. Critics have argued such a large number of ballots could not have been hand-counted in such a short time.