Wolfowitz: U.S. should reach out to Moussavi 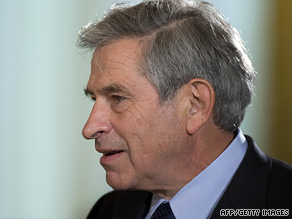 Paul Wolfowitz was the deputy defense secretary in the Bush administration.

"I would certainly find out if he (Moussavi) wants a conversation," former Deputy Defense Secretary Paul Wolfowitz told CNN's Wolf Blitzer. "If he doesn't, I certainly wouldn't push it. But I would make it clear that the phone is an open line."

Obama on Saturday issued a written statement on the bloodshed across the streets of Tehran as demonstrators protest the election outcome, saying, "The Iranian government must understand that the world is watching. We mourn each and every innocent life that is lost.

"We call on the Iranian government to stop all violent and unjust actions against its own people. The universal rights to assembly and free speech must be respected, and the United States stands with all who seek to exercise those rights."

However, Obama has been criticized by some lawmakers and analysts who say he should vocalize a stronger stance on the clashes.

Watch the latest videos being leaked out of Iran »

"I understand the concern about meddling in a way that seems to label the opposition as American tools, but the opposition made it very clear they want support from the world," said Wolfowitz, a staunch supporter of the U.S.-led war in Iraq and a scholar at the American Enterprise Institute.

CNN Senior Political Analyst David Gergen added that, "It would be useful for the president to show more forceful leadership internationally on this issue."

He noted the graphic images emerging from Iran, including the fatal shooting of a young female protester identified as Neda, saying the violence calls for "some kind of humanity from the West."

Gergen and Wolfowitz said the United States should rally with other Western nations and even countries in the region -- including Afghanistan and Turkey, which have recognized incumbent President Mahmoud Ahmadinejad as the winner of the June 12 election -- to support the Iranian people.

Moussavi and candidate Mehdi Karrubi have rejected the election as fraudulent and demanded a new one.

Wolfowitz called Moussavi a "very brave man," saying, "He is resisting. He is putting his life at risk."