From Iranian rooftops, a view of protest and violence

(CNN) -- When the sun went down, their voices did not. 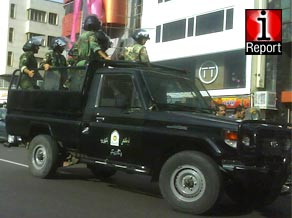 Riot police on the street in Tehran on Monday.

"Allah O Akbar!" the crowds on the tops of building chanted over and over.

Cell phone footage shows the nighttime scene in Tehran, Iran, which was sent to CNN's iReport. As the camera pans with a jerk from building to building, protesters whistle and shout loudly while cars are heard honking in support.

The phrase, which means, "God is great" has become a rallying cry for protesting Iranians who have risked their lives and clashed with riot police because they believe the nation's recent presidential election was rigged. Watch iReport video of the protest chorus

CNN spoke with the man who shot the footage. He didn't want to give his name. Doing so might jeopardize his impending escape from Iran and entry into Belgium, he said. He was reached by phone while driving in Tehran Sunday at 10 p.m. ET after he sent the video to iReport's headquarters in Atlanta, Georgia. See iReporter's cell phone photos taken Monday in Iran

He described seeing candles across the city which had been lit around 7 p.m. in Iran. Many were placed on rooftops in the memory of a woman known to the world as "Neda."

A widely circulated video of the young woman shows her apparently in the middle of protests over the weekend with an older man, believed to be her father. It looks as though she is shot in the chest and drops to the ground. Blood runs from the side of her mouth as a few people, including the older man, press on her chest and shout her name. One pleads, "Do not to be afraid." The camera closes in on her face as her eyes roll back and are still. She appears to die on camera.

Another shocking video sent to CNN's iReport was also filmed from a rooftop, this time looking down at what seems to be an extremely violent scene on the roof of a shorter building. A group of men in black, members of the nation's Basij militia, the iReporter says, appear to gang up on one man and beat him with batons. The footage shows him lying motionless as the men in black walk away.

Internet posts on Twitter and Facebook continue to be come from across the globe. Hundreds for Neda. "More helicopters flying over Tehran today than any previous day" someone from inside Iran tweeted Monday.