(CNN) -- Israeli Prime Minister Benjamin Netanyahu said Sunday that Israel could accept a peace agreement with a "demilitarized Palestinian state" as its neighbor. 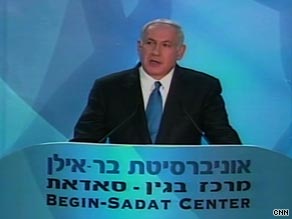 Israel PM Benjamin Netanyahu said he would agree to peace with Palestinians.

In his first speech accepting the concept of a two-state solution for the Middle East conflict, Netanyahu set rigid conditions for moving forward. Among them: unequivocal Palestinian recognition of Israel as the Jewish national state with Jerusalem as its capital, and full demilitarization for a Palestinian state -- no army, no rockets or missiles, no control of airspace.

"I say this in a clear voice -- if we receive a guarantee of this demilitarized unit, we will be prepared to reach agreement to a demilitarized Palestine side by side with the Jewish state," Netanyahu said, according to a direct translation of his speech at Bar-Ilan University's Begin-Sadat Center for Strategic Studies in Ramat Gan, Israel.

Initial Palestinian reaction was negative, with Palestinian legislator Mustafa Barghouti saying Netanyahu was calling for creation of a ghetto state.

"He is proving there is no partner for peace in Israel," Barghouti told CNN.

Chief Palestinian Negotiator Saeb Erakat said Netanyahu "left us with nothing to negotiate as he systematically took nearly every permanent status issue off the table."

"He announced a series of conditions and qualifications that render a viable, independent and sovereign Palestinian state impossible," Erakat said.

"This speech fell far short of every single one of the benchmarks required of Israel in line with international law and existing agreements," he said, including the 2003 Roadmap for Peace.

Obama welcomed Netanyahu's speech as "an important step forward" and said the president remained committed to a two-state solution that would ensure Israel's security and provide the Palestinians "a viable state," according to a White House statement.

Obama pledged to continue working with all parties "to see that they fulfill their obligations and responsibilities," the statement said.

Netanyahu, of the center-right Likud party, previously refused to endorse a two-state solution.

Netanyahu sounded themes popular with his conservative followers, repeatedly referring to Israel as the Jewish national homeland and demanding recognition of that by all Arab foes, including the Palestinians, for any chance at a peace agreement.

He prompted applause with his statement that "the land of Israel is homeland to the Jewish people, and that is the basis of our right to it."

"The Palestinian leadership must rise up and say in a very straight way that we are tired of this conflict, we will recognize the right of the Jewish people to have a national homeland in this part of the world," Netanyahu said, according to the direct translation.

He said Jerusalem would remain the capital of Israel -- refusing to yield on a sensitive issue for Palestinians -- and that a Palestinian state would have to be fully demilitarized to ensure the safety of Israel.

Obama, in his June 4 speech in Cairo, Egypt, endorsed a two-state solution and urged compromise between "two peoples with legitimate aspirations." He repeated his call for both Israel and the Palestinians to fulfill all obligations under the 2003 Roadmap for Peace, including a halt to any expansion of West Bank settlements by Israel.

Obama called America's bond with Israel "unbreakable" but said Palestinians have suffered in pursuit of a homeland. He also called for an end to Palestinian incitement against Israel and greater security in Palestinian territories.

On Sunday, Netanyahu acknowledged the suffering on both sides from the continuing Middle East conflict, but insisted the roots of the conflict came from the Arab world's refusal to accept Israel's right to exist.

All About Benjamin Netanyahu • Israel