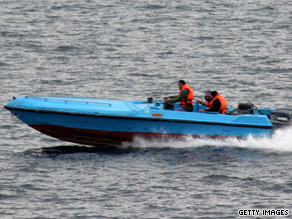 This so far is the only acknowledged U.S. military reaction to the unfolding situation in Iran.

Two U.S. defense officials with direct knowledge of the highly classified message confirmed the details to CNN but said the issue is so sensitive that they could not divulge whose signature was on the message. It was distributed via secure communications in recent days. The officials talked with CNN on condition they not be identified.

Both underscored that the message is not an indication U.S. forces are at any higher state of alert. However, the U.S. military is extremely concerned, they said, that given unrest in Iran, any encounter between U.S. and Iranian units could inadvertently escalate.

"We are watching, and ensuring disciplined restraint on the part of our naval forces," one official told CNN. The U.S. military's concern is that Iranian naval forces could engage in some activity in the Gulf waters that could be a "triggering event," that U.S. forces might been compelled to react to.

The second official said there is also great concern that Iran not misunderstand this message calling for restraint, and think the United States is lowering its guard.

He said that U.S. forces "have been prudently reminded to view any Iranian actions during this time from that perspective and that we should remain diligent and disciplined in all circumstances."

One reason for the concern is what the U.S. military views as undisciplined command and control of some Iranian naval units, especially those manned by Iran's Revolutionary Guard Corps.

In January 2008, several U.S. Navy warships in the Persian Gulf were harassed by small Iranian speed boats, raising maritime tensions between the two countries. The U.S. Navy acknowledged in that incident it came within seconds of firing on the Iranians.