Five U.S. contractors held in slaying of another in Iraq

BAGHDAD, Iraq (CNN) -- Five American security contractors were detained in connection with the killing of another American contractor last month inside Baghdad's Green Zone, sources with knowledge of the investigation told CNN Saturday. 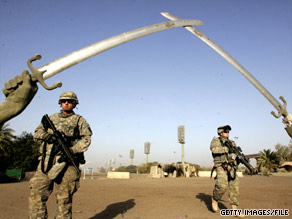 The body of James Kitterman was found in a car in Baghdad's heavily protected Green Zone.

Iraqi and U.S. personnel took the five into custody in an operation inside the Green Zone before dawn on Friday, according to an Iraqi official involved in the investigation into the killing of James Kitterman. The five, who have not yet been charged, were being held by Iraqi security forces Saturday at a jail inside the heavily protected zone, he said.

The troops also confiscated weapons during the raid on the suspects' firm at about 4 a.m. (11 a.m. ET), said the official, who spoke on condition of anonymity.

The names of the suspects and the company they work for were not released. The U.S. military declined comment and referred questions to the U.S. Embassy in Baghdad. Embassy officials did not immediately respond to request for comments.

Once the suspects are charged and referred to trial, the case would be sent to Iraq's Central Criminal Court, the Iraqi official said. If that happens, it would be the first time U.S. citizens were tried in Iraq since the United States returned the country's government to the Iraqis.

CNN's Mohammed Tawfeeq and Alan Duke contributed to this report.