ISTANBUL, Turkey (CNN) -- In an elaborately choreographed ceremony broadcast live on television, the leaders of Iraqi Kurdistan began pumping oil from Kurdish-controlled oil fields in northern Iraq through a pipeline to neighboring Turkey. 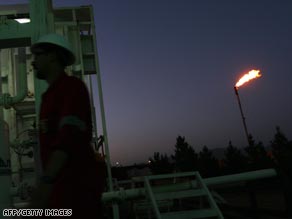 A worker at the oil refinery near the village of Taq Taq in the province of Irbil.

It is the first time Iraq's semi-autonomous Kurdish region has officially exported oil out of the country.

For years, the central Iraqi government in Baghdad has been at odds with the Kurds, arguing they do not have the right to exploit oil in territory under Kurdish control. Kurdish officials have ignored Baghdad's warnings, and signed dozens of agreements with small foreign oil companies.

The two sides finally reached an agreement on the issue last month.

"I believe that the cooperation between northern Iraq and Baghdad administrations is useful and beneficial for all. Therefore this strategic cooperation will continue," said Massoud Barzani, the president of the Kurdistan Regional Government. He was speaking in Kurdish before a hall filled with dignitaries, at a glitzy ceremony complete with swirling spotlights and a bleached-blond Turkish female master of ceremonies.

The oil is being exported from the Taq Taq field in the province of Irbil. Kurdish officials and representatives from Genel Enerji, a Turkish company working in Taq Taq, said initially only 40,000 barrels of oil would be exported a day. That is a fraction of the 1.8 million barrels a day currently being exported by Iraq. But at the ceremony, the oil minister in Iraqi Kurdistan, Ashti Hawrami, announced Kurdish exports could increase to as many as 450,000 barrels a day.

"As much as Baghdad might like to object, economy (sic) reality necessitates that it go along with the Kurds -- for now," wrote Joost Hiltermann, an Iraq expert with the International Crisis Group, in a recent article on Foreign Policy.com.

Hiltermann argued that the sharp drop in the price of oil last year forced the Iraqi central government to compromise with the Kurds, as Baghdad scrambled to find alternative sources of much-needed revenue.

Under the arrangement, the Iraqi government will get the bulk of the earnings from Kurdish oil exports, while the Kurdistan Regional Government will be allotted 17 percent of the revenues.

The cooperation of neighboring Turkey has been critical for the export deal to go through. In the past, the Turkish government has vehemently opposed any move by the Iraqi Kurds to develop oil resources, because of Turkish fears that the oil revenues would allow the Kurds to establish an independent state.

In recent months, relations have improved dramatically between the Turks and the Iraqi Kurds. The Kurdish oil exports will likely be pumped through to the Turkish port of Ceyhan, on the Mediterranean Sea.

Kurdish officials and their foreign partners are now looking at the possibility of exporting natural gas from Iraqi Kurdistan, through Turkey, to gas-hungry markets in Europe.

Officials in Iraq's Oil Ministry, however, say such a deal would require permission from the Iraqi central government.