TEHRAN, Iran (CNN) -- Iranian President Mahmoud Ahmadinejad said Monday he did not call for a ban on Facebook during the country's presidential election. 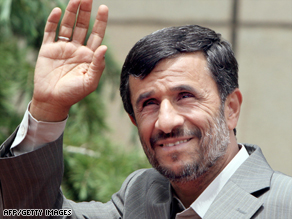 "I should make an inquiry and ask about this," he said when asked about reports that his government blocked access to the online social networking site.

The hardline Iranian president made the comment in response to a question from CNN at a news conference.

Asked whether he would order that access to Facebook be reinstated, Ahmadinejad responded that he would "see if there is a complaint" that may be presented to the judiciary.

The semi-official Iranian Labor News Agency reported over the weekend that the Iranian government had blocked Facebook amid political jockeying for the June 12 presidential election.

Those attempting to visit Facebook were receiving a message in Farsi saying, "Access to this site is not possible," according to CNN personnel in Tehran.

The news agency reported the Masadiq Committee, made up of representatives from Iran's intelligence ministry, judiciary and others, had ordered the action. After a few hours, the block was lifted, but then reinstated later, the agency said. No reason was given.

"We are disappointed to learn of reports that users in Iran may not have access to Facebook, especially at a time when voters are turning to the Internet as a source of information about election candidates and their positions," a Facebook spokesperson said in a written statement. "We are investigating these reports.

"We believe that people around the world should be able to use Facebook to communicate and share information with their friends, family and co-workers. It is always a shame when a countries' cultural and political concerns lead to limits being placed on the opportunity for sharing and expression that the Internet provides."

Ahmadinejad's challengers are increasingly turning to new technology to spread their message, according to a May 13 article in the Financial Times newspaper.

Iran's population -- estimated at more than 66 million by July 2009, according to the CIA World Factbook -- has a median age of 27. The Financial Times, which put the country's population at 70 million, said 47 million Iranians have cell phones and 21 million have Internet access.

"We are using new technologies because they have the capacity to be multiplied by people themselves who can forward Bluetooth, e-mails and text messages and invite more supporters on Facebook," Behzad Mortazavi, head of Mousavi's campaign committee, told the Financial Times.

At a Mousavi rally at a stadium Saturday, the Facebook blockage was a topic of conversation among reporters. Many said they had accessed Facebook on Friday night and believe the site was blocked Saturday morning.

CNN's Reza Sayah and Shirzad Bozorgmehr contributed to this report.