(CNN) -- There is hardly anything in U.S.-Arab relations that screams scandal louder than the torture pictures of Abu Ghraib: 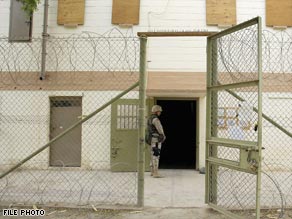 The abuse that went on behind these gates hardened Arab opinion against the United States.

Naked hooded male bodies in the fetal position, piled up on top of each other in a pyramid shape, next to them U.S. soldiers in uniform smiling and giving two thumbs up. Naked males made to touch their genitals on camera, others beaten so hard that paramedics are at hand to treat their wounds in preparation for the next round of torture.

For the Arab world, the human body is a taboo, a sacred temple that should be covered and respected. For many, exposing the naked body is a sin. So it is no surprise that taking pictures of the naked, hooded men was seen as a sick inexcusable act. The United States was already unpopular in the Arab world, mainly because of its war in Iraq. After Abu Ghraib in most quarters, it became despised with a vengeance.

Before the pictures and videos became public in 2004, horror stories of what was going on inside the notorious Abu Ghraib prison were reported on Arab media in bits and pieces. We'd heard from people whose identity was hidden for their own protection.

They described despicable acts of sexual abuse and torture that sounded more from a made-up horror tale than from real-life experience. For many Arab media observers, those claims were simply hard to believe. That is, until hundreds of photos and some videos were made available to the public that showed exactly what former Abu Ghraib prisoners had described on Arab media, and even worse.

Arab newspapers and TV networks seemed to run out of words in describing the shock at the images they were printing on their front pages and showing in their newscasts.

Anchors, reporters and guests felt uneasy about this bizarre story and all the twists and turns that followed. Those included a guided media tour of Abu Ghraib, showing that the situation was under control and inmates were being treated with dignity and respect. The shock quickly turned to anger against the United States and pity toward the victims. Arab commentators described the photos as "shameful," the act of U.S. soldiers "barbaric."

The outrage at the acts carried out by U.S. soldiers was a common reaction in the West and among Muslims and Arabs around the world. However, the way the reaction was translated on the ground was different.

Gen. Mark Kimmitt first made his rounds on Arab networks arguing that these were isolated acts, made by a few low-ranking soldiers. He said on the most-watched Arab network, Al-Jazeera, that he was "appalled" at the photos, but he stressed that the images were being "used as a tool" to impact the U.S. military negatively. His boss, then Defense Secretary Donald Rumsfeld, broke his silence a few weeks later and reiterated that only a handful of low-level Army troops were involved in the abuse. He also offered to resign twice but his resignation was never accepted.

Three months after the photo scandal, amid growing Arab and world outrage that showed no signs of calming, President Bush appeared on the U.S. government-run Arabic-language Al-Hurra TV. Many Arab commentators and columnists were expecting an apology and some high level officials to be held accountable. Neither happened. Bush said, "I view those practices as abhorrent." But he added that Iraqis "must understand that what took place in that prison does not represent the America that I know." The president's interview with his own station was seen in the Arab world as an attempt to pacify the situation instead of dealing appropriately with the problem.

When another wave of Abu Ghraib torture photos became public in 2006, the reaction wasn't as strong because it seemed by then that the Arab world had given up on America. Sateh Noureddine of Lebanon's independent newspaper Assafir wrote that the scandal confirms an image of America "already engraved in people's minds in the Middle East." The image is that America isn't genuine about conducting "an experiment of democracy" in the region.

As soon as the news broke that more torture pictures could be released this year, Arab media rolled the old photos of humiliated Iraqi prisoners. The same pyramid of naked bodies showed up and that of a female soldier pulling a prisoner on a leash around his neck.

Anchors asked questions about what news the new pictures could bring. Will they show that the Bush administration approved of those torture tactics and applied them in Abu Ghraib, Guantanamo Bay and perhaps elsewhere? Was the torture a directive given to soldiers rather than low-level military personnel engaging in "abhorrent" practices as the president called them? There is nothing any new photos can prove that wasn't already discussed and oftentimes believed on the Arab street already.

One political cartoon by Lebanese journalist Stavro Jabra from May 2004 describes the mood in the Arab region and its experience of the scandal. It was inspired by one infamous Abu Ghraib photo, but, in the cartoon, the U.S. female soldier is replaced by Lady Liberty. At the end of her leash, instead of the Iraqi prisoner, lies President Bush.

It was a clear reflection of an Arab view that the Abu Ghraib scandal will be a stamp of shame on the Bush administration. History will judge if it is an accurate prediction.

All About Abu Ghraib • Torture