John L. Allen Jr. is the senior correspondent for the National Catholic Reporter and senior Vatican analyst for CNN. 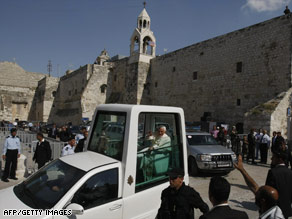 Pope Benedict leaves the Church of Nativity in his pope mobile after celebrating Mass Wednesday in Bethlehem.

JERUSALEM (CNN) -- The Middle East may be the most hyper-sensitive piece of real estate on earth, where no more than a stray word or gesture can trigger an explosion.

For precisely that reason, the Vatican had hoped that Benedict's trip to the region this week could surmount the occasional PR gaffes that have plagued his papacy. He would stay "on message" about peace, reconciliation, and inter-faith solidarity.

That game plan began to unravel Tuesday. The pope's spokesman issued an unsolicited denial that Benedict XVI had ever been a member of the Hitler Youth, only to have to retract that denial within a couple of hours. In so doing, the Vatican inadvertently reopened a chapter of the pope's past that most people had considered closed.

The Rev. Federico Lombardi, an Italian priest who serves as the pope's spokesman, made the statement in a briefing with reporters on Tuesday, after Benedict's hugely symbolic visits to the Dome of the Rock and the Western Wall in Jerusalem.

In his prepared remarks, Lombardi complained that media outlets had been reporting a "falsehood," namely the claim that Joseph Ratzinger, the future Benedict XVI, had belonged to the Hitler Youth.

Journalists who have followed Benedict XVI closely over the years were startled by that assertion, because it's well known that the pope, more than 10 years ago, discussed having been involuntarily enrolled in the Hitler Youth as a young seminarian growing up in Hitler's Germany.

In a 1997 book-length interview with a German journalist titled "Salt of the Earth," then-Cardinal Ratzinger said: "When the compulsory Hitler Youth was introduced in 1941, my brother was obliged to join. I was still too young, but later, as a seminarian, I was registered in the H.Y."

Ratzinger went on to discuss how he never took part in the group and stayed as far away from it as possible.

Roughly two hours after his original statement on Tuesday, Lombardi took a huge step backwards. Asked by reporters for clarification, he said he could confirm that Ratzinger was registered in the Hitler Youth and was technically a member.

"This was a formal thing, which was not a significant part of his life," Lombardi said. "He had no active participation and no identification with this movement."

To be sure, the young Ratzinger came out of a strongly anti-Nazi family, and the evidence is clear that he never participated in any Hitler Youth activities, was never a member of the Nazi party, and became part of an auxiliary unit of the Germany army only because he was drafted.

He was appalled by Nazism and has a long record of affection for Jews and Judaism. Nonetheless, it's a fact of his biography that Joseph Ratzinger was once registered in the Hitler Youth.

All this was widely discussed when he was elected to the papacy four years ago, and when the dust settled, most observers considered it resolved because of the clear evidence that the pope had been anti-Nazi from the start. If anything, the fact that the pope had been compelled to register in the Hitler Youth gave him credibility in addressing the horrors of National Socialism, since he had seen them from within.

Yet the Vatican's clumsy attempt to deny something that the pope himself had already conceded long ago reawakened the story, prompting media agencies around the world to rehash the details.

Probably the last place on earth the Vatican would want to launch a news cycle dedicated to Benedict and the Hitler Youth would be in Israel, and yet that's exactly how it played out.

In the end, the episode is probably no more than a footnote to the broader themes of the pope's historic Middle East visit, but it does illustrate one critical point: When it comes to public relations, the pope and his team are far from infallible.

The opinions expressed in this commentary are solely those of John L. Allen Jr.