(CNN) -- Pig farmers threw rocks at police officers in Cairo, Egypt, on Sunday as health workers gathered the farmers' herds for slaughter in what the government says is a precaution against the spread of swine flu, an interior ministry official told CNN. 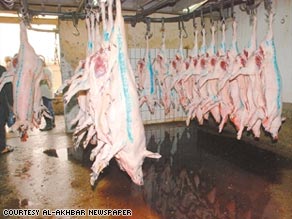 The Egyptian government required all pigs in the country be killed, citing a need to prevent the spread of swine flu.

Brig. Gen. Hani Abdel-Latif said 50 to 60 protesters gathered in Cairo's Manshiyet Naser slum because they were upset with the health ministry's decision to slaughter all pigs in the country.

But local media reported the number of farmers clashing with police on Sunday was in the hundreds.

Experts have criticized the Egyptian government's move, announced last week, to slaughter all pigs regardless of whether they are infected.

There have been no confirmed cases of the virus in Egypt.

And according to the U.S.-based Centers for Disease Control and Prevention, humans cannot get the swine flu virus, known to scientists as the H1N1 virus, by eating pork. The CDC says human infection from pigs most likely occurs when people are in close proximity to sick animals, such as in pig barns.

But Egyptian officials cite how avian flu still exists in the country because, they say, the government did not take sufficient protective measures when that disease was first discovered there in 2006.

Most Egyptian pig farmers are Coptic Christians, a group that makes up about 10 percent of the 80 million people in the mostly Muslim nation. Coptic Christians do not observe the Muslim ban on eating pork, and historically they have coexisted peacefully with the Muslim majority in Egypt.

The farmers also work in the garbage industry and use their daily collections to feed their herds, which number about 300,000 animals in the country.

With the government-mandated slaughter under way, Egypt's Health Ministry declared Saturday that "Egypt is free of the swine flu."

Dr. Hamid Samaha, head of the country's Public Institute for Veterinary Services, said that starting Sunday the government will compensate pig farmers by paying as much as $45 for a disease-free pig and about $5 for diseased ones.

The health ministry told CNN its workers are freezing all the disease-free meat and plan to give it back to its owners once the ban on pigs is lifted. But according to Egypt's state-run al-Akhbar newspaper, ministry sources said the country does not have enough facilities to store the frozen meat. Ministry spokesman Dr. Abdel-Rahman Shaheen said the government will open two new slaughterhouses in two provinces near Cairo, al-Alioubiya and al-Giza.

Shaheen also announced Saturday that the ministry has enlisted 100 additional doctors and nurses to help in health quarantines at Cairo Airport, where travelers are being questioned if they have been to Mexico recently. And more are expected to be hired to help at Alexandra's main seaport, where the government declared a state of emergency last week.

CNN's Housam Ahmed in Cairo contributed to this report.