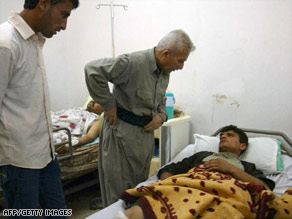 A man lies in a hospital after a roadside bombing near Kirkurk on Saturday. Three Iraqis were killed.

The incident took place at a combat outpost just south of the northern Iraqi city of Mosul, where there has been a strong presence of anti-U.S. militants, and it underscored the dangers for U.S. troops and Iraqi security forces in that city.

A second gunman also fired on other U.S. soldiers at the outpost and fled, said Cheng, a spokesman for the U.S.-led Multi National Division-North.

Iraq's Interior Ministry said the gunman was a soldier in training who was standing close to U.S. soldiers when he aimed his firearm at them and began shooting.

There have been similar incidents of men in Iraqi security force uniforms in the Mosul area opening fire on U.S. troops. In February, insurgents dressed as Iraqi police officers killed a U.S. soldier and an interpreter in the city.

Asked whether there seems to be a rise in such attacks, Cheng replied, "We still view these as isolated incidents either by individuals posing as Iraqi Security Forces or members acting out on their own."

"These events do not represent the overall relationship or partnership U.S. forces have with our Iraqi counterparts."

Overall, violence and attacks are down in Iraq, but despite improvements in the big picture, the U.S. military is concerned with hot spots such as Mosul.

Maj. Gen. David Perkins, MNF-Iraq spokesman, told reporters on Friday that the city remains a danger. He said the U.S. military is studying whether American combat troops scheduled to withdraw from urban centers in Iraq by June 30 should actually remain in the diverse metropolis -- populated by Sunni Arabs, Kurds, Christians and others.

Perkins said al Qaeda in Iraq (AQI) militants "are transitioning and becoming more and more concentrated ... mainly in Mosul and in Baghdad."

"What we have always said with regards to al Qaeda is that strategically for AQI to win they have to win Baghdad and for them to survive they have to hold on to Mosul and you can see that by how they are conducting their attacks."

In the last couple of weeks, he said, militants have focused their activity on Baghdad, and attacks in Mosul have dropped somewhat.

"But there is still a lot activity. This is probably the main area we are looking at that could possibly result in U.S. forces being there," he said of Mosul. "Probably more so than any other place."

"Of all the places in Iraq, it is the area that you would most likely possibly see a very similar U.S. presence to what you see now. But only if Iraqis want that."

U.S. troop fatalities in Iraq last month reached 18, the highest of the year. However, the number of monthly Iraqi troop deaths have plummeted since earlier in the war.

Forces used helicopters to attack the village and shelled it with artillery. The village is just over the Iranian border in Iraq's Sulaimaniya province -- a Kurdish region.

Meanwhile in Kirkuk, in northern Iraq, three civilians were killed and three others were wounded when a roadside bomb struck their vehicle on Saturday, police said.

It is not known who the bomb might have been targeting, but the incident reflects the hostilities in the oil-rich and ethnically diverse city.

All About Al Qaeda in Iraq • Mosul