(CNN) -- A conference of Islamic prosecutors in Iran worked Wednesday to draft an indictment against Israeli leaders, accusing them of crimes against humanity and war crimes in Gaza. 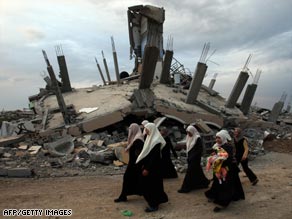 Palestinian women walk past a building destroyed during Israel's campaign in Gaza.

The charges stem from Israel's late-December offensive into Gaza against Hamas militants. The Israeli military has been accused of using excessive and indiscriminate force in civilian areas.

Israel is "a regime that only understands the language of violence and force," Iranian President Mahmoud Ahmadinejad said at the gathering, in calling for the prosecution of Israeli "criminals."

"I am confident that there will come a day when all Zionist criminals will be brought to justice," he said on the second day of the conference in Tehran, the capital of Iran.

The Iranian president regularly rails against Israel and has called for the Jewish state's elimination.

Yigal Palmor, a spokesman for the Israeli Foreign Ministry, said: "The day when this conference will start dealing with human rights in the countries that are members of this organization will be the day that their claims concerning Israel will be deserved to be heard, not before. People who live in glass houses shouldn't throw stones, let alone commit suicide bombings."

"The accusations themselves are nothing more than the hysterical, hostile coverage of the media in these countries and not based on solid facts," he continued.

Israel also has said that the offensive was to defend against repeated rocket attacks by Palestinians.

The Israel Defense Forces said on Wednesday its forces "operated in accordance with international law" during recent fighting in Gaza, but said there were a few incidents in which "intelligence or operational errors" occurred.

This is the conclusion of probes that emerged from Operation Cast Lead, in which Israel was broadly criticized for its actions in Gaza.

Phosphorus shells can be used to create a smokescreen for troops. In creating the diversion, the element ignites when exposed to oxygen and can cause severe burns.

The Israeli offensive was launched December 27 and ended January 17 with a cease-fire. Of the 1,453 people estimated killed in the conflict, 1,440 were Palestinian, including 431 children, a U.N. report recently said.

A spokesman for the Israeli prime minister called the U.N. report an example of the "one-sided and unfair" attitude of the U.N. Human Rights Council, which had requested it.

The two days of meetings in the Iranian capital have included more than 200 senior judicial officials from the Organization of the Islamic Conference -- an association of 56 states.

The organization might ask the U.N. International Court of Justice to charge Israeli leaders with crimes against humanity and war crimes in Gaza. The court would not be obligated to act.

All About War Crimes • Gaza • Israel