WASHINGTON (CNN) -- President Obama is launching an effort "to achieve a comprehensive peace in the Middle East," his spokesman said Tuesday. 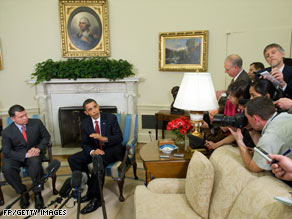 President Obama speaks to the media during a meeting Tuesday with Jordan's King Abdullah II.

Obama has invited key regional leaders to Washington in the coming weeks for consultations on the peace process, Robert Gibbs said.

Dates for the visits are still being worked out, he said.

"With each of them, the president will discuss ways the United States can strengthen and deepen our partnerships with them, as well as the steps all parties must take to help achieve peace between Israelis and Palestinians and between Israel and the Arab states," Gibbs said.

The leadership of Hamas, considered by the United States and Israel to be a terrorist organization, is not being invited. The group, which also provides social services, won elections in the Palestinian territories in 2006, prompting stringent sanctions from the West.

After the election, skirmishes between Abbas' Fatah and Hamas escalated, ending with Hamas in charge in Gaza and the Fatah-led Palestinian Authority in charge in the West Bank.

A six-month cease-fire between Hamas and Israel ended late last year and was followed by Israel's three-week incursion into Gaza. Israel said that operation was aimed at halting rocket and mortar fire on its southern towns and communities.

Despite a cease-fire called in January at the end of that fight, both Hamas rocket fire and Israeli airstrikes have continued.

Obama appointed a special Middle East envoy on his second full day in office -- former Sen. George Mitchell -- and dispatched him to the region within weeks.

Last week, during his third trip to the region since his appointment, Mitchell reiterated the U.S. desire to see a "two-state solution" in the Middle East, bringing speculation that the United States and Israel's new right-leaning government could be on a collision-course.

Netanyahu has indicated he wants serious negotiations with the Palestinians to continue, but he has not explicitly stated his support for Palestinian statehood.

Questions about the new Israeli government's commitment to a negotiated peace process came up when the nationalist politician and new Foreign Minister Avigdor Lieberman declared the Annapolis process "null and void." The Annapolis process, launched by the Bush administration, paved the way for the resumption of Israeli and Palestinian talks after they stopped earlier in the decade.

The United States has been making on-again, off-again forays into solving the Middle East crisis for decades.

Former President Bush made a push late in his term, convening a peace conference at Annapolis, near Washington, at the end of 2007.

"The parties have said they are going to make efforts to conclude this during the president's term. That's what we will try and do," then-Secretary of State Condoleezza Rice said in November 2007, a week before the conference.

Bill Clinton hammered away at the problem as president in the 1990s, bringing together Palestinian leader Yasser Arafat, King Hussein of Jordan, and Prime Minister Ehud Barak of Israel at Camp David in the last year of his presidency. They failed to reach a deal.

Arafat and Hussein have since died. Barak is defense minister under Israeli Prime Minister Netanyahu in a right-leaning government.

Israeli Foreign Minister Avigdor Lieberman, a hardliner, said last week the "traditional approach" to Middle East peacemaking "has so far brought neither results nor solutions" and that the "diplomatic process has reached a dead end," according to a press release from his ministry.