TEHRAN, Iran (CNN) -- A well-known Iranian filmmaker has written an open letter calling for the release of journalist Roxana Saberi. 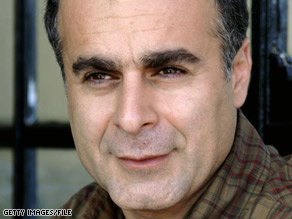 In a letter, Iranian filmmaker Bahman Ghobadi blames himself for urging Roxana Saberi to stay in Iran.

Bahman Ghobadi said he kept quiet about the arrest and conviction of the Iranian-American journalist at the request of her family. After Saberi was convicted last weekend and sentenced to an eight-year prison sentence, he said he felt he had to do something.

He told CNN that Saberi, whom he described as his fiancee, is caught in a "game of politics."

In his letter, which has been posted by the International Campaign for Human Rights in Iran, Ghobadi blames himself for urging Saberi to stay in Iran despite her desire to leave. Also, he writes, "My letter is a desperate call to all statesmen ... and to all those who can do something to help."

"From the other side of the ocean, the Americans have protested against her imprisonment, because she is an American citizen," he writes. "But I say no, she is Iranian, and she loves Iran. I beg you, let her go! I beg you not to throw her in the midst of your political games! She is too weak and too pure to take part in your games. Let me be present at her trial, sit next to her wise father and gentle mother, and testify she is without guilt or reproach."

The 40-year-old filmmaker said that Saberi was planning to leave the country, but he kept her from leaving until his latest film -- which will be shown at this year's Cannes film festival -- was completed.

Ghobadi won the 2000 Golden Camera award at the Cannes festival for his feature film, "A Time for Drunken Horses."

Saberi, 31, was sentenced Saturday to eight years in prison after a one-day trial that was closed to the public. The decision prompted sharp denunciations from President Barack Obama, as well as other U.S. and international officials.

Iranian officials initially said Saberi was held for buying a bottle of wine. The Foreign Ministry later said she was detained for reporting without proper accreditation. On April 9, word emerged that Saberi had been charged with espionage.

Saberi's lawyer has said he will appeal the verdict. Judiciary Chief Ayatollah Hashemi Shahroudi has ordered the head of Tehran's Justice Department to make sure the appeals process is quick and fair.

Ghobadi wrote that he is "optimistic about her release, and I firmly hope the verdict will be canceled in the next stage of the trial."

"My Iranian girl with Japanese eyes and an American ID, is in jail. Shame on me! Shame on us!"

CNN's Igor Krotov and Shirzad Bozorghmehr contributed to this report.

All About Iran • Roxana Saberi