BAGHDAD, Iraq (CNN) -- Thousands of followers of radical Shiite cleric Muqtada al-Sadr rallied in Baghdad on Thursday to mark the sixth anniversary of the fall of Saddam Hussein's regime. 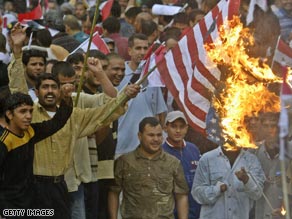 Demonstrators burn an American flag at a rally in Baghdad, Iraq, on Thursday.

They rallied at Firdous Square, where Hussein's statue was pulled down on April 9, 2003, shortly after the U.S. invasion of Iraq.

Hazem al-Araji, a senior aide to the radical Shiite cleric, called on the Iraqi government to release all Sadrist detainees inside U.S. and Iraqi prisons.

"Everyone shout out loud and let all those who live inside the Black Zone and Bush, the damned, hear our voices and release the Sadrist detainees immediately," al-Araji said.

He also called on President Obama to support Iraqis and remove U.S. troops from Iraq.

One protester called on the "occupation" to get out of Iraq and, at his urging, the crowd chanted "down, down America."

Al-Araji also called on the protesters to shout out "No no America, No no Israel, Yes yes Iraq."

Iraqi security forces closed off the surrounding streets and a number of the bridges during the rally, which al-Sadr announced on March 21.