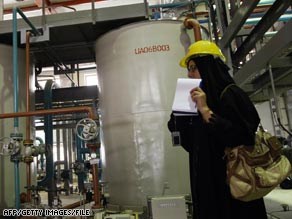 The first is "the packaging of fuel and making the fuel ready to be put inside the reactor" at Iran's only nuclear plant to produce power, Ahmadinejad said, speaking on his nation's National Nuclear Technology Day.

He said the second is the testing of two new types of centrifuges whose capacity is "several times greater" than existing capacity. Centrifuges are used to enrich uranium.

Centrifuges are used to enrich uranium.

Ahmadinejad's comments were broadcast nationally from the city of Esfahan, about 100 miles south of the Natanz nuclear enrichment facility in central Iran.

Iran denies that charge, saying its its nuclear program is solely for peaceful purposes.

Gholam Reza Aghazadeh, who heads Iran's nuclear program, said in Esfahan that 7,000 centrifuges have been installed at Natanz, and the goal is to produce 50,000.

U.S. Secretary of State Hillary Clinton signaled both skepticism about the latest Iranian claims, and a willingness to push forward with U.S. intentions to speak directly to Iran.

"We don't know what to believe about the Iranian (nuclear) program," Clinton said at the State Department Thursday afternoon. "We have heard many different assessments and claims over a number of years," she said.

On Wednesday, in a dramatic break from previous policy, the State Department announced the United States would join talks between U.N. and European powers and Iran over Tehran's nuclear program.

In careful language Thursday, Clinton appeared to disagree with the idea that the Iranian claims could be construed as a rebuff to the United States just a day after making that announcement.

"We do not attribute any particular meaning with respect to the range of issues that we are looking to address with the Iranians from this particular statement," Clinton said.

"It would benefit the Iranians, in our view, if they cooperated with the international community, if they abided by a set of obligations and expectations that effect them and by which we believe they are bound -- and we are going continue to insist on that," she said.

Ahmadinejad said Iran must continue its nuclear development to increase its status among nations, and he criticized the United States and other "enemies" for trying to restrict its progress. Iran will not stand down, he said.

"The Iranian nation deserves to act as a flag bearer in this path, to actually materialize its objectives based on divine teachings. Due to the blessings of God, we are getting closer to that point. We should eliminate the impediments," the leader said.

In a statement carried by the official IRNA news agency, Ahmadinejad said Iran was "ready to cooperate" toward nuclear disarmament as long as those efforts did not create obstacles.

In February, the Institute for Science and International Security released a report that concluded Iran does not have a nuclear weapon but does have enough low-enriched uranium for a single nuclear weapon.

But an official at the IAEA cautioned about drawing such conclusions. The U.N. nuclear watchdog agency said Iran's stock of low-enriched uranium would have to be turned into highly enriched uranium to be weapons-grade material.

The official said Iran has not done so, and the agency's monitors and surveillance equipment at the Natanz facility would be able to detect any such activity.

On Monday, the semi-official Mehr News Agency quoted minister of power Parviz Fattah saying he hoped the nuclear power plant will produce electricity for use as early as this summer.