BAGHDAD, Iraq (CNN) -- At least seven Iraqis were killed and 23 wounded when a bomb exploded near a Shiite holy shrine in northern Baghdad on Wednesday morning, an Interior Ministry official said. 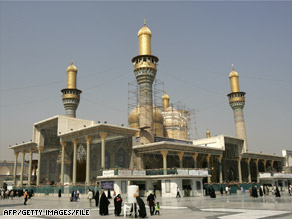 The Imam Musa al-Kadhim shrine in Baghdad, Iraq, seen in 2007, is holy to Shiite Muslims.

The bomb detonated near the Imam Musa al-Kadhim shrine in the Kadhimiya district, the official said.

The Kadhimiya shrine is one of the holiest shrines for Shiite Muslims around the world.

On Tuesday, a parked car bomb killed at least nine people and wounded more than a dozen others, also in Kadhimiya.

This is the third straight day of deadly attacks in the capital, striking mostly Shiite areas.

On Monday, seven bombings in Baghdad left at least 32 people killed and more than 130 wounded.

Iraqi officials have warned that they expect a rise in attacks. The country's president and his deputies urged security forces to intensify their efforts to secure the country.

The government has blamed the ousted Baath party and al Qaeda in Iraq for Monday's attacks, saying they were meant to create sectarian divisions.

The U.S. military also pointed the finger at al Qaeda.

"The nature of the attacks and targets are consistent with past al Qaeda in Iraq attacks. We see this as coordinated attack by terrorists against predominantly Shia targets that they gauge as vulnerable to instigate sectarian violence," the U.S. military said.

All About Iraq • Al Qaeda in Iraq • Islam