Obama offers Iran 'the promise of a new beginning'

WASHINGTON (CNN) -- President Barack Obama reached out to Iran on Friday -- the start of the Iranian New Year -- in a video message offering "the promise of a new beginning" that is "grounded in mutual respect." 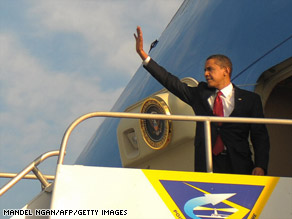 Obama's message to Iran echoes his inaugural speech, where he said "we seek a new way forward."

The message is a dramatic shift in tone from that of the Bush administration, which included Iran, along with North Korea and Iraq, in an "axis of evil." It also echoes Obama's inaugural speech, in which he said to the Muslim world, "we seek a new way forward, based on mutual interest and mutual respect."

In Friday's video, Obama said: "The United States wants the Islamic Republic of Iran to take its rightful place in the community of nations. You have that right, but it comes with real responsibilities. And that place cannot be reached through terror or arms, but rather through peaceful actions that demonstrate the true greatness of the Iranian people and civilization."

There was no immediate response from Tehran to Obama's message, but Iranian President Mahmoud Ahmadinejad said last month that his country would welcome talks with the United States "in a fair atmosphere with mutual respect."

The United States, several European nations and Israel suspect that Tehran has been trying to acquire the capacity to build nuclear weapons, but Iran says its nuclear program is solely for peaceful purposes.

Last month, the Washington-based Institute for Science and International Security released a report saying that Iran has reached "nuclear weapons breakout capability" -- it has enough uranium to make a nuclear bomb.

The report was based on an analysis of data from the International Atomic Energy Agency. However, an IAEA official who asked not to be named cautioned against drawing such dramatic conclusions from the data, saying Iran's stock of low-enriched uranium would have to be turned into highly enriched uranium to be weapons-grade material. That hasn't been done, the official said.

The United States has had tortuous relations with Tehran since the Islamic revolution in 1979, but the Obama message speaks of "new beginnings" with the promise of a new year.

"We have serious differences that have grown over time. My administration is now committed to diplomacy that addresses the full range of issues before us, and to pursuing constructive ties among the United States, Iran and the international community," the president said. "This process will not be advanced by threats. We seek, instead, engagement that is honest and grounded in mutual respect."

All About Mahmoud Ahmadinejad • Tehran