(CNN) -- Yemen says al Qaeda was behind a suicide bombing Sunday that killed four South Korean tourists, according to the Daily Yemen Post. 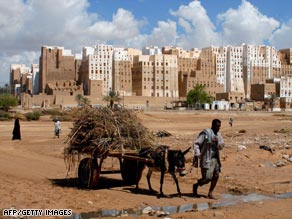 The city of Shibam is a UNESCO World Heritage Site.

The explosion Sunday evening in the city of Shibam also wounded three other tourists, said Hakim Almasmari, editor-in-chief of the English-language newspaper.

CNN could not immediately reach the Yemeni government for confirmation.

The bomb was very strong and could be heard some 4 kilometers (2.5 miles) away from the site, in the Al-Qubah district of Shibam, which is in Hadramot province, Almasmari said.

The nationalities of the three injured people were not immediately known.

The tourists were taking pictures of Shibam at sunset, Almasmari said. The old walled city is a United Nations Educational, Scientific and Cultural Organization (UNESCO) World Heritage Site; sunset is the best time to take pictures of it, he said.