(CNN) -- The human rights group Amnesty International is calling on the United Nations to impose an arms embargo on Israel and the Palestinians, saying both sides used weapons supplied from abroad to carry out attacks on civilians during their three-week conflict in Gaza. 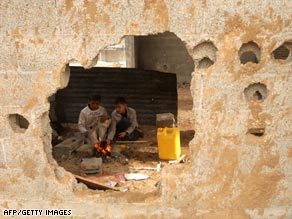 Palestinian children make coffee behind a bullet and rocket riddled wall in Rafah, Gaza, on January 24, 2009.

The London-based group issued a 38-page report Sunday night that detailed "evidence of war crimes and other serious violations of international law by all parties."

Israeli forces used white phosphorus and other weapons supplied by the United States, killing hundreds of civilians and destroying homes, the group said.

The use of white phosphorus is restricted under international law. In the early days of the Gaza conflict, the Israel Defense Forces denied using the ordnance. But later, Israeli officials said only that any shells fired in Gaza were "in accordance with international law."

Many of the munitions used by the Israeli army were American-made, and included bombs, white phosphorus remains and missiles seemingly launched from unmanned drones, Amnesty said.

"To a large extent, Israel's military offensive in Gaza was carried out with weapons, munitions and military equipment supplied by the U.S.A. and paid for with U.S. taxpayers' money," Malcolm Smart, Amnesty's Middle East director, said in the report.

He called on the United States to immediately suspend military aid to Israel.

The United States is to provide $30 billion in military aid to Israel under a 10-year agreement that runs till 2017 -- a 25-percent increase compared with the period preceding the Bush administration, Amnesty said.

The group also took to task Hamas, the Islamic militant group that has ruled Gaza since 2007. It said it found remains of Qassam and Grad rockets fired by Palestinian armed groups in civilian areas.

Grad rockets have a longer range than the crude, home-made Qassams. Israel said Palestinian militants have fired about 10,000 rockets and mortars into Israel in the past eight years.

"These unsophisticated weapons are either smuggled into Gaza clandestinely or constructed there from components secretly brought in from abroad," Amnesty said.

Israel's foreign ministry responded harshly to the report, calling it biased and "dedicated almost exclusively to the censure of Israel."

The ministry said the report does not mention Hamas' "deliberate use" of civilians as human shields. It also said Israel's use of weapons complied with international law and denied that its forces targeted civilians.

"The comparison of the supply of weapons to Israel and the Hamas in inappropriate," the ministry said in a statement. "Israel is a sovereign nation that is obligated to use force to protect its citizens, while Hamas is a terror organization."

Israel launched the attack on Hamas in Gaza on December 27 with the stated aim of ending rocket attacks on southern Israel.

More than 1,300 Palestinians died and about 5,400 others were wounded. Thirteen Israelis, including 10 soldiers, were killed in the fighting.

Since the two sides declared a cease-fire on January 21, militants have sporadically fired rockets into Israel. Israel has responded with airstrikes.