LONDON (CNN) -- Iran offered to stop attacking coalition troops in Iraq nearly four years ago in an attempt to get the West to accept Tehran's nuclear program, a British diplomat told the BBC in an interview aired Saturday. 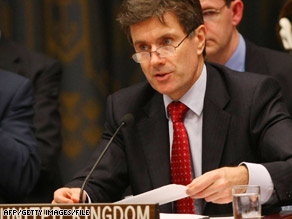 "The Iranians wanted to be able to strike a deal whereby they stopped killing our forces in Iraq in return for them being allowed to carry on with their nuclear program -- 'We stop killing you in Iraq, stop undermining the political process there, you allow us to carry on with our nuclear program without let or hindrance," said John Sawers, now the British ambassador to the United Nations, in the documentary, "Iran and the West: Nuclear Confrontation."

The United States and other Western nations believe Iran is pursuing a nuclear weapons program, but Iran says it is developing nuclear capability to produce energy. Iran also has been accused of sponsoring terrorists and supplying weapons to Iraqi insurgents. The latter prompted a warning from the United States that such behavior by Tehran "would be regarded by us as enemy action," Philip Zelikow, a State Department counselor, told the BBC.

Then, Iran began shopping its offer around Europe, Sawers said.

Sawers, Britain's political director at the time, reveals the behind-the-scene talks from 2005 -- when roadside bombing against British and American soldiers in Iraq peaked -- were held with British, French and German diplomats at hotels in London, Paris and Berlin.

"And then we'd compare notes among the three of us," Sawers told the BBC.

Iran has denied offering any such deal and reiterated its position Saturday.

"Iran's high officials have repeatedly stated that Iran has not had any part in attacks against American and British forces, and there is no evidence to support these baseless accusations," Iranian Foreign Ministry spokesman Hassan Qashqavi said, according to the semi-official Mehr News Agency.

Interviews with top brass from former President Bush's administration and British envoys indicate that Iran and the West had neared agreements several times in the past few years, but never reached success.

Nick Burns, who was in charge of the Bush administration's State Department policy with Iran, said taking a tough approach with Iran didn't seem effective.

"We had advocated regime change," Burns told the BBC. "We had a very threatening posture towards Iran for a number of years. It didn't produce any movement whatsoever."

The documentary aired a day after the Washington-based Institute for Science and International Security released a report stating that Iranian scientists have reached "nuclear weapons breakout capability." The report analyzed the finding of the U.N.'s nuclear watchdog agency, the International Atomic Energy Agency (IAEA).

However, an IAEA official who asked not to be named cautioned against drawing such dramatic conclusions from the data, saying Iran's stock of low-enriched uranium would have to be turned into highly enriched uranium (HEU) in order to be weapons-grade material. That hasn't been done, the official said.

Meanwhile, Iran's relationship with the West continues to be strained, though both sides have indicated interest in holding direct talks.

President Obama, in his first prime-time news conference held earlier this month, said the United States is looking for opportunities for "face-to-face" talks with Iran after an absence of diplomatic ties for nearly three decades.

"There's been a lot of mistrust built up over the years, so it's not going to happen overnight," he said.