TEHRAN, Iran (CNN) -- Ameneh Bahrami is certain that one day she'll meet someone, fall in love and get married. But when her wedding day comes, her husband won't see her eyes, and she won't see her husband. Bahrami is blind, the victim of an acid attack by a spurned suitor. 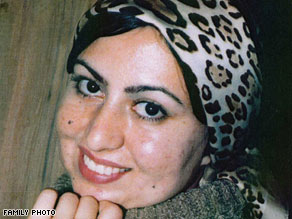 Ameneh Bahrami said her attacker pestered her with marriage demands.

If she gets her way, her attacker will suffer the same fate. The 31-year-old Iranian is demanding the ancient punishment of "an eye for an eye," and, in accordance with Islamic law, she wants to blind Majid Movahedi, the man who blinded her.

"I don't want to blind him for revenge," Bahrami said in her parents' Tehran apartment. "I'm doing this to prevent it from happening to someone else."

Bahrami says she first crossed paths with Movahedi in 2002, when they attended the same university.

She was a 24-year-old electronics student. He was 19. She never noticed him until they shared a class. He sat next to her one day and brushed up against her. Bahrami says she knew it wasn't an accident.

"I moved away from him," she said, "but he brushed up against me again."

Watch Bahrami return to the attack scene for the first time »

When Bahrami stood up in class and screamed for him to stop, Movahedi just looked at her in stunned silence. He wouldn't stay silent for long.

Bahrami said that over the next two years, Movahedi kept harassing her and making threats, even as he asked her to marry him. "He told me he would kill me. He said, 'You have to say yes.' "

On a November afternoon in 2004, Movahedi's threats turned to violence.

That day at 4:30 p.m., Bahrami left the medical engineering company where she worked. As she walked to the bus stop, she remembers sensing someone behind her.

She turned around and was startled to see Movahedi. A moment later came the agonizing pain. Movahedi had thrown something over her. What felt like fire on her face was acid searing through her skin.

The acid seeped into Bahrami's eyes and streamed down her face and into her mouth. When she covered her face with her hands, streaks of acid ran down her fingers and onto her forearms.

Two weeks after the attack, Movahedi turned himself in to police and confessed in court. He was convicted in 2005 and has been behind bars all along.

Bahrami's lawyer, Ali Sarrafi, said Movahedi had never shown any remorse. "He says he did it because he loved her," Sarrafi said.

Attack victims in Iran usually accept "blood money": a fine in lieu of harsh punishment. With no insurance and mounting medical bills, Bahrami could've used the cash, but she said no.

"I told the judge I want an eye for an eye," Bahrami said. "People like him should be made to feel my suffering."

Bahrami's demand has outraged some human rights activists. Criticizing acid-attack victims is almost unheard of, but some Internet bloggers have condemned Bahrami's decision.

"We cannot condone such cruel punishment," wrote one blogger. "To willingly inflict the same treatment on a person under court order is a violation of human rights."

Late last year, an Iranian court gave Bahrami what she asked for. It sentenced Movahedi to be blinded with drops of acid in each eye. This month, the courts rejected Movahedi's appeal.

Bahrami's lawyer, Sarrafi, said the sentencing might be carried out in a matter of weeks. He said he doesn't think Bahrami will change her mind. Neither does Bahrami.

"If I don't do this and there is another acid attack, I will never forgive myself for as long as I live," she said.

Bahrami is largely self-sufficient despite not being able to see. She can make a salad, prepare tea and walk up the five flights of stairs that lead to her parents' apartment.

She has undergone more than a dozen surgeries on her badly scarred face, but she says there are many more to come. She can't afford to pay for her medical care, so she's using the Internet to raise money.

She's lost her big brown eyes, but she likes to smile, especially when she imagines her wedding day.

"I always see myself as someone who can see and sometimes see myself in a beautiful wedding gown, and why not?"

All About Iran • Domestic Violence