(CNN) -- The Palestinian militant group Hamas said Monday that it is willing to consider the release of an Israeli soldier who was seized in a cross-border raid more than two years ago. 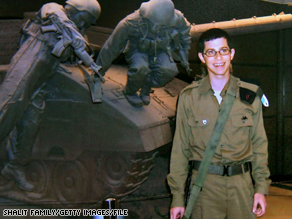 Gilad Shalit, who was seized by Palestinians, is shown in a family photo.

But the Hamas leadership of Gaza will not release Gilad Shalit as part of a broader cease-fire agreement with Israel, according to a statement released Monday from Hamas political official Raafat Naseef.

Hamas is a fundamentalist Palestinian Islamic group whose military wing has attacked Israel. The United States and Israel consider it a terrorist organization, but it also operates a social services network.

Hamas is in control of Gaza after winning parliamentary elections in 2006, and in 2007, a campaign of violence forced the Fatah movement led by Palestinian Authority President Mahmoud Abbas out of Gaza.

The matter of Shalit was one of three issues that Hamas sought to "clarify" its commitment to in the statement.

It said the clarifications were "in light of recent developments which are concurrent with the Cairo dialogues" -- a reference to Egypt's attempts to broker a larger, more detailed cease-fire between Israel and the Hamas leadership of Gaza.

Shalit was 19 when he was captured June 25, 2006, by Palestinian militants from Gaza, including those from Hamas.

The militants tunneled into Israel and attacked an Israeli army outpost near the Gaza-Israel-Egypt border, killing two other soldiers in the assault.

Israel immediately launched a military incursion into Gaza to rescue Shalit, but failed.

Outgoing Israeli Prime Minister Ehud Olmert has been under pressure to secure Shalit's release as part of a broader cease-fire deal with Hamas.

Earlier this month, Olmert said recent media reports about the negotiations to secure the Shalit's release were "exaggerated and damaging."

Last week, Israel held elections for a new government which the centrist Kadima with just one seat more than the right-wing Likud both parties are now seeking to form a ruling coalition.

The strong showing of other right-wing parties -- including Yisrael Beytenu and the Orthodox Shas movement -- means Likud has more natural allies.

Liked leader Benjamin Netanyahu said Monday: "We have a government in our hands, but we want a broader one."

He added that he will negotiate with other parties, including Kadima, "to form a broad national unity government."

"With God's help, I shall head the coming government," he said. "I am sure that I can manage to put together a good, broad-based and stable government that will be able to deal with the security crisis and the economic crisis."

Netanyahu -- who served as prime minister from 1996 to 1999 -- has supported the expansion of Israeli settlements on the West Bank and has opposed making further territorial concessions in hope of ending the decades-old Israeli-Palestinian conflict.

CNN's Ben Wedeman and Tracy Doueiry contributed to this report.

All About Gilad Shalit • Hamas • Israel