BAGHDAD, Iraq (CNN) -- A female suicide bomber Friday detonated in a crowd of mostly women and children on their way to a religious festival, killing at least 38 people and wounding 50 others, an Interior Ministry official said. 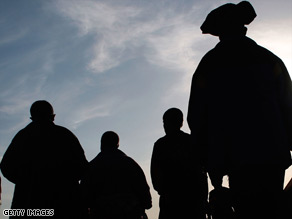 Devout Shia Muslims walk in Baghdad towards the holy city of Karbala.

The attack took place around noon between the towns of Iskandariya and Mussayib, south of the capital, Baghdad, as hundreds of thousands of Shia pilgrims are making their way to Karbala for Arbaeen, one of the holiest Shiite events.

Ten of those injured are in critical condition.

The suicide attack comes on the heels of other bombings targeting Shiite pilgrims earlier in the week and are signs that the sectarian conflicts that devastated Iraq in recent years are not over.

An explosion in Karbala on Thursday killed at least five Shiite pilgrims and wounded 50 near a shrine.

The holy day commemorates the end of a 40-day mourning period for Imam Hussein, the grandson of the Prophet Mohammed and one of the most revered Shiite figures. He died in battle in the seventh century and is buried in Karbala.

In recent years, insurgents have targeted Shiite pilgrims, who usually walk to Karbala from across Iraq as a demonstration of piety and as part of tradition. The city is about 60 miles (100 km) southwest of Baghdad.

Last year, a flurry of attacks on pilgrims killed at least 48 people. In 2007, more than 180 pilgrims were killed in a series of attacks, most from suicide bombings in Babil province, through which the pilgrims pass.

More than 30,000 Iraqi Security Forces troops have been deployed in and around Karbala this year to protect the anticipated millions of pilgrims heading there for Monday's commemoration, according to Karbala's military commander, Gen. Othman al-Ghanemi.

All About Al Qaeda in Iraq • Karbala • Mosul • Shia Islam