Stray dogs being killed in Baghdad

BAGHDAD, Iraq (CNN) -- The shotgun blast rips into the stray dog's midsection, sending it tumbling over and over. Agonizing yelps echo through the streets as it tries to reach and bite at the gaping wound. Minutes later, the dog is dead. 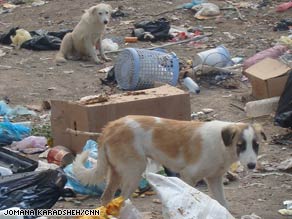 Stray dogs roam a Baghdad neighborhood in November 2008, when the culling program began.

A few miles away, a puppy eats a piece of poisoned meat. Its body starts to twitch and spasm as the toxins kick in. It dies within 15 minutes.

The two strays were among the thousands that roam the streets of Baghdad. Authorities have been killing them since November, trying to prevent the spread of disease and attacks on residents.

The Baghdad dog-culling program comprises two vets, a council official and a police officer armed with a shotgun. The vets distribute bits of meat poisoned with strychnine. If the poison doesn't kill the dogs, the police officer steps in with the shotgun.

"I do have mercy for all animals," veterinarian Khalil Abdullah said. "But we can't vaccinate the wild animals in the street, and we don't have the means or ability to bring them all to the hospital."

The Society for the Prevention of Cruelty to Animals (SPCA) International calls the methods used by the Baghdad culling program inhumane. SPCA spokeswoman Terri Crisp says the organization understands that Iraq is a war zone, posing a unique set of challenges, but alternatives such as mobile spay and neuter and vaccination programs are available.

"We've seen this work in other countries that have very similar stray animal problems," Crisp said.

Just killing the strays dogs is a bandage approach, she said.

The SPCA has offered to help the Iraqi government, but the response has been slow.

"Given all of what's going on over in Iraq right now, it takes time. Things don't always move as quickly as we would like them to," Crisp said. But, she said, other programs, including one that allows U.S. military personnel in Iraq to bring their pets back to the States, have taken time to take root.

The Iraqi government welcomed offers of help but said the strays are the responsibility of Baghdad's municipal government.

Municipal officials said they have no other options other than killing the dogs.

"We do wish that our situation here in Baghdad would improve in general, so that we can then provide better solutions for issues like the stray dogs, so we can have the same standards as European countries," local council head Shakib Mohammed said. "But we don't even have tranquilizer guns. What you see is the best we have."

The last dog culling in Baghdad took place before the U.S.-led invasion in 2003. Since then, the stray dog population increased dramatically and became a threat to humans, authorities said.

Some Iraqis say that in areas where the sectarian killing was high and bodies lined the streets, the dogs became used to eating human flesh.

An Iraqi veterinarian said that makes the strays more aggressive toward humans.

Students at a girls' high school in Baghdad welcomed the culling teams, saying the dogs had become a menace.

"They would attack us in the morning when we were on our way to school," student Hanan Sami said. "Not just one but packs of them."

The girl said she has a pet dog and loves animals, but said the strays have to be dealt with.

"How are we supposed to deal with dog bites and the spread of disease when we have such a lack of medicine here?" Youniss said.

As the search for strays goes on, a puppy yaps from behind a pile of rubble. Adult dogs scatter. Abdullah takes pity on the puppy. He'll take it home and vaccinate it, he says.

The others in the street are going to have to fend for themselves.

All About Iraq • Dogs