BAGHDAD, Iraq (CNN) -- She's been called the "mother of the believers," a middle-aged woman possibly responsible for recruiting more than 80 female suicide bombers in Iraq and involvement in at least 28 terrorist operations. 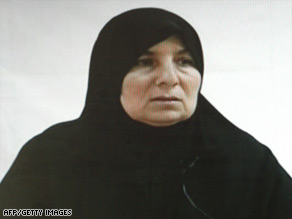 Now she's in jail, arrested on January 21 in what an Iraqi commander called "heroic" security force operations that unfolded without "any losses."

Maj. Gen. Qassim Atta, spokesman for the Baghdad command, identified the suspect as Samira Ahmed Jassim, also known as Umm-al-Moumineen, or "the mother of the believers." The arrest is considered a major stride in confronting the challenge of female suicide bombers, more than 30 of whom detonated themselves last year.

Atta couldn't say where she was detained for intelligence reasons. That's because the authorities are after more targets.

The bombers were recruited in Baghdad and Diyala province for the Ansar al-Sunna militant group, said Atta, who added police were aware of the identities of the women, including their fake names on fake IDs, and were on the hunt for them. They said they were also trying to verify Jassim's confessions.

Atta played a DVD for reporters with excerpts of the confessions of Jassim, who is in her 40s or 50s. Wearing a black robe and veil, she said she was asked by a man named "Shaker" to recruit women for an Ansar al-Sunna operative named Hareth, also known as Abu Rami.

She spoke about a number of the women she recruited, spending days talking to prospective operatives and persuading them to carry out attacks.

Jassim said she would deliver a recruit to Shaker.

Later, she returned and picked up the recruit, dropping them at locations like the Muqdadiya police station, a Sons of Iraq office and a Baghdad car park.

One woman she recruited didn't even look at Jassim when she was picked up for a job. She just whispered Quranic verses en route to a bombing. Another woman -- described as psychologically challenged -- came from a financially hard-up family.

In November, 18 would-be female suicide bombers turned themselves in to coalition forces in northern Iraq.

The women, whose ages and names were not released by the military, gave themselves up after being persuaded by religious leaders and family members to "cease their training in suicide operations and reconcile," the U.S. military said.

The women were connected to al Qaeda in Iraq suicide bombing cells, but it was not clear where they had been training or operating. The statement also did not say where the women turned themselves in, though the northern city of Mosul and surrounding parts of northern Iraq are still a hotbed for insurgent activity and considered the last stronghold for al Qaeda in Iraq.

Troops have launched operations targeting members of families of suspected female bombers trying to break up the rings that are recruiting the women and girls.

Intelligence gathered from detainees indicates that al Qaeda in Iraq is looking for women with three main characteristics: those who are illiterate, are deeply religious or have financial struggles, most likely because they've lost the male head of the household.

Females always have played a role in the insurgency in Iraq, helping feed militants, hiding them in their homes and helping to sneak weapons around the country.

They have proven to be highly effective in their operations, because of the cultural convention that women are not to be searched by men for cultural and religious reasons. The U.S. military has created a program called the Daughters of Iraq, analogous to U.S. backed Sons of Iraq, to conduct searches of women.

All About Iraq • Mosul • Al Qaeda in Iraq