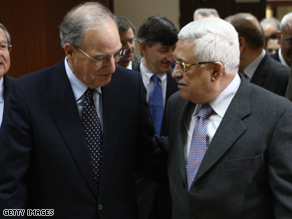 George Mitchell (left) is welcomed by Mahmoud Abbas in the West Bank city of Ramallah.

George Mitchell met with Palestinian Authority President Mahmoud Abbas in the West Bank city of Ramallah and with Israel Defense Forces Chief of Staff Lt. Gen. Gabi Ashkenazi as sporadic fighting continued in the Gaza, still smoldering in the aftermath of warring between Israeli soldiers and Hamas militants.

A tentative cease-fire between Israel and Hamas-ruled Gaza began on January 21 after Israel's three-week military operation in the region. More than 1,300 Palestinians died and about 5,400 others were wounded, while 13 Israelis, including 10 soldiers, were killed.

Speaking to reporters in Ramallah, Mitchell held a "lengthy discussion" with Abbas and spoke of the need to pursue "a sustainable and durable cease-fire."

Mitchell said he passed on to Abbas the "deep concern" of President Obama over "the loss of Palestinian life and the humanitarian needs in Gaza."

"Lasting peace is our objective, and the United States will sustain an active commitment to reaching the goal of two states living side by side in peace, stability and security," Mitchell said.

Israeli forces, which attacked militants in Gaza to stop the constant barrage of rockets on Israeli communities outside Gaza, say Hamas has used weapons smuggled into Gaza through tunnels between Egypt and the southern Gaza town of Rafah. Palestinians have decried Israeli military actions depriving the territory of much-needed goods and aid.

"To be successful in preventing the illicit trafficking of arms into Gaza, there must be a mechanism to allow the flow of legal goods. And that should be with the participation of the Palestinian Authority," he said.

In Tel Aviv, Ashkenazi talked with Mitchell about the "main points" of Israeli security operations in the West Bank and the "goals of the recent Israeli operation in Gaza. In addition, they discussed the security challenges faced by the IDF and Israel, the strategic situation in the Middle East and the need to face the global threat of terror," the Israel Defense Forces said.

The statement said Ashkenazi "praised the strategic and security cooperation and relationship between the United States and Israel and wished Mr. Mitchell luck in his mission to the region."

The meetings are among those Mitchell is conducting on what is described as a "listening tour" of the region.

This is an attempt by the new U.S. administration to help foster peace between Israel and the Palestinians. Mitchell's stop in Israel is part of an eight-day tour, which includes visits to Egypt, the West Bank, Jordan and Saudi Arabia, the State Department said.

On Wednesday Israeli Prime Minister Ehud Olmert told Mitchell that the cease-fire between Israel and Gaza would hold only if Hamas -- which rules Gaza -- ends weapons smuggling into Gaza and halts rocket fire into Israel.

One of Israel's key demands in peace talks has been for international help shutting down tunnels into Gaza, which Israel says Hamas is using to smuggle weapons into the territory from Iran.

Hamas is considered a terrorist organization by the United States and Israel.

Sporadic fighting in Gaza continued as the IDF said it had launched an aerial strike on a terror operative trained by Hamas. An IDF statement said they believed the man was connected to the recent killing of one of its officers.