'Jihadi rehab' is a possibility for post-Gitmo

(CNN) -- U.S. lawmakers considering the closure of the controversial Guantanamo Bay detention center will probably be looking at a rehabilitation program in Saudi Arabia that focuses on religious re-education for captured jihadists. 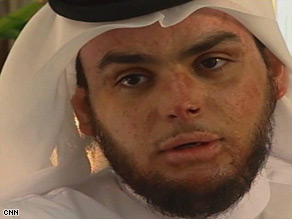 Ahmed, who took part in a bombing mission in Iraq, said he was a "wiser man" after taking part in the program.

President Obama issued executive orders relating to Guantanamo last week, including one requiring that the detention facility at a U.S. Naval base in Cuba be closed within a year.

Now some analysts are asking not only whether intelligence agencies will be able to get the information they need to keep America safe but where the prisoners will eventually end up.

The answer to the second part of this question may lie partly in the Saudi rehab program that analysts in that country say has helped deal a big blow to al Qaeda.

Since the 2003 bombings in Riyadh that killed dozens there have been no major attacks in the kingdom, they point out.

Libya is using a similar philosophy of religious re-education, moving away from brutal treatment of militants in jails, and Pakistan is also looking at it.

The program focuses on religious re-education for young men, all in their late teens to early 30s, captured while engaged in terrorist activities.

Of the 218 people who have taken part, only nine have since been rearrested after trying to rejoin al Qaeda, Saudi officials told CNN.

"We have reduced the threat but cannot say we have eliminated it," said interior ministry spokesman Gen. Mansoor al Turki.

"Such a re-education program will help the police to make sure these people get rid of the ideology that penetrated their brains [and to] make sure, when they leave prison, [they] can lead [a] normal life."

The key to the government-run scheme's success is the way it uses imams, or religious teachers, to explain to the young, radicalized Muslims that not everyone can issue a fatwa.

It tells them that what they have been taught previously is wrong: You cannot just go and kill someone.

In an al Qaeda cell, one person will issue a fatwa to justify whatever violent action the group will take, but the rehabilitation program makes clear that to issue a fatwa you must be a well-trained, experienced imam.

One young man who had been through the program said he had learned his lesson.

Ahmed, who admitted driving a truck that exploded in Iraq, killing 12 people, said he had been brain-washed by al Qaeda militants. "They told me Americans kill Muslims in Iraq and Afghanistan ... and they brainwash me. ... They said it's the honorable thing to do to go fight Americans."

Ahmed said that he was just a regular Muslim before he was radicalized but that the program had taught him the error of his ways, and now, "I will never think about the jihad again."

"My message to all young people: If you are in Iraq, leave and come back home and ask governments and elders about religion. Don't do what these bad people tell you to do. Everyone makes mistakes.

"I used to hate Americans. Now it's different. Thank God I am a wiser man and I know right from wrong. In the program, they taught me killing a person -- Muslim or non-Muslim -- is wrong even if he gets in my way. You should help people, not hurt them."

The program came about after the Saudi government recognized that locking up the young radicalized Muslims and mistreating them in jail was counterproductive and served only to foment anger in the Islamic world.

Reformed jihadists said Abdel Aziz al-Muqrin, for example, the al Qaeda leader in Saudi Arabia who was killed in 2004, was angry about his treatment in jail.

So officials realized that a better way to deal with the threat of radicalized Muslims was to rehabilitate them.

"It's not easy just to take the behavior or the person with behavior or bad behavior and put him in jail," said psychologist Turki Al-Otayan. "How about his thoughts? How about his emotions? That's why we have the advisory committee to correct the cognitive things and the emotional things."

Al-Otayan said that if the program did not exist, the young men would easily revert to their old ways. "If we leave them, someone will take our job like the terrorists or the mujahadeen. ... They will pass them money."

He said he was convinced that the program had greatly cut the number of young Muslims traveling to Iraq to carry out jihad.

Officials realize that it will never be 100 percent successful, and it is labor-intensive and expensive, but it may very well be among the approaches that U.S. officials will consider as they work out how to close the Guantanamo Bay detention facility and rehabilitate the 700 or so prisoners.

All About Saudi Arabia • Terrorism