JERUSALEM (CNN) -- Israel's government on Sunday approved a measure that will give legal protection to its military officers if they are accused of war crimes during the Gaza incursion, Prime Minister Ehud Olmert said. 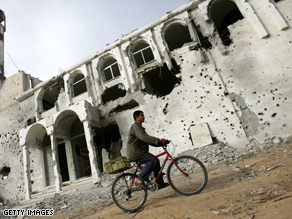 A Palestinian rides his bike near a mosque damaged during the attack by Israel on Gaza.

"The state of Israel will completely back anyone that acted in its name," Olmert said Sunday at the beginning of the weekly Cabinet meeting. "The soldiers and commanders that were sent on missions in Gaza need to know that they are safe from different tribunals.

Israel launched a 22-day assault on Hamas, the Palestinian movement which controls Gaza, in December. More than 1,300 Palestinians died during the air and ground campaign, and 13 Israelis were killed.